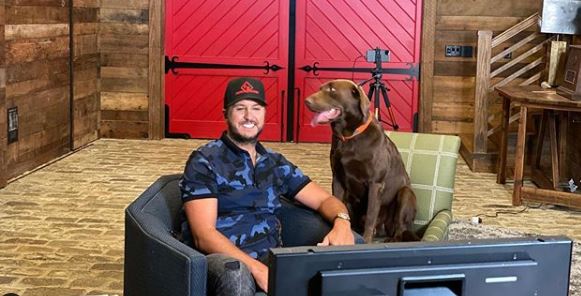 Luke Bryan recently released a new song, “Build Me A Daddy.” This song will be included on Luke’s new album, Born Here, Live Here, Die Here. On June 18, Jimmy Fallon featured the music video for this heartwarming song on his Tonight Show.

Luke Bryan on The Tonight Show

In the June 18 episode of The Tonight Show Starring Jimmy Fallon, Luke Bryan’s music video made its first TV appearance. The video shows Luke playing his guitar and singing the song in a church. “Build Me A Daddy” is sung from the perspective of a boy who wishes he could have his father back. In the story, the little boy goes to a toymaker and asks him to build his dad for him. Then, he continues with a description of his father.

On June 11, Luke announced on Instagram that the music video for his newest song would premiere that night. He shared a sneak peek of the video and wrote, “There are people out there who are going to really, really relate to this song and it’s going to affect them in a beautiful way. My video for #BuildMeADaddy premieres tonight at 11pm CT.” Later, he posted a longer clip of the video. In this post, he also announced that the video was available.

The song’s meaning for Luke Bryan

Luke is a father of five. So, the country star understands the importance of being a good dad. He first had two sons, Thomas and Tatum, with his wife Caroline.

In 2007, Luke’s sister Kelly passed away, leaving her son and two daughters to her husband. Then, seven years later, the kids lost their father. So, Luke and Caroline decided to invite their nephew and nieces into their home.

Luke says that he knows that many people can relate to this story. He hopes that “Build Me A Daddy” touches them “in a beautiful way.”

Country music has always had such a beautiful way of telling a story. This song tells a story many people know all too well. My video for #BuildMeADaddy is available now. #LinkInBio Video: @blackmike2309

“Build Me A Daddy” fan video

On June 18, Luke Bryan announced on his Instagram story that he’s hosting a photo contest. He’s inviting fans to send him pictures of them with their fathers. Winners of the contest will be featured in the fan video for “Build Me A Daddy.” Pictures can be submitted on his website, LukeBryan.com.

“Build Me A Daddy” is one of the ten songs on Luke Bryan’s new album, Born Here, Live Here, Die Here. The album will be released on August 7 and is currently available for pre-order on Luke’s website. As an added bonus, those who pre-order the album will be able to immediately download five songs, including “What She Wants Tonight” and “One Margarita.” Furthermore, some pre-order packages include Born Here, Live Here, Die Here merchandise.

What do you think of Luke Bryan’s new song, “Build Me A Daddy”? Will you be purchasing or pre-ordering Born Here, Live Here, Die Here?

Carrie Underwood Hearkens Back To Signature Style On New Tune
Blake Shelton Headlines 2 Major Events, See What
Miranda Lambert Voted One Of Most Influential People 2022
Jimmie Allen Puts The APB Out On ‘On My Way’ With Jennifer Lopez
Maren Morris’ Tour Bus Is Far From Humble