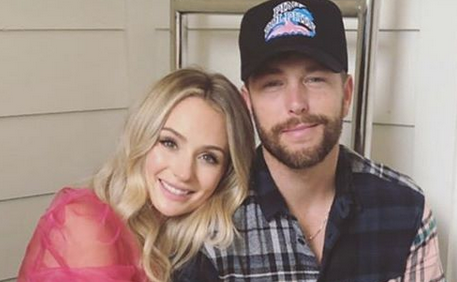 Country star Chris Lane recently released the lyric video to his song, “Big, Big Plans.” He originally wrote the song to play while he proposed to his girlfriend at the time, Lauren Bushnell. Lauren said yes, and the two tied the knot in October 2019. After using the song for his own proposal, Chris started playing the song live, and fans used it to propose to their significant others. In an interview with People, Chris and Lauren talk about “Big, Big Plans” and their first year together.

Chris released “Big, Big Plans” in 2019. As soon as it hit the radio, it became one of Chris’s most popular songs. He tells People, “It became my song on the radio, and then next thing I know, we’re getting all these requests for guys to propose to their girlfriends on stage at a show.” Chris has performed this song for numerous proposals, but he never gets tired of them.

He continues, “I absolutely love that moment. I look forward to it every single night.” Chris Lane admits that his own proposal is kind of a blur because he was so full of emotion that day. He explains that he enjoys watching on-stage proposals because he’s happy for the couples and understands what they’re feeling at that moment.

Chris’s wife Lauren also tears up over proposals to “Big, Big Plans.” She describes one of her favorite love stories, saying “I think there was one recently where this young guy had just finished his last chemo treatment.” Lauren explains that he decided to celebrate the end of his treatment by planning a future with his girlfriend. He popped the big question on stage while Chris Lane played “Big, Big Plans.”

Chris and Lauren are a ‘perfect match’

Chris Lane married Lauren in the fall of 2019. Because Chris is usually busy traveling for shows, the couple was worried that they’d have limited time together. However, thanks to the pandemic, the newlyweds have had the opportunity to spend lots of time with each other. When asked about his relationship, Chris says, “We’re still a perfect match for each other.”

My baby and my son

Chris is grateful for extra free time and the chance to spend his quarantine with Lauren. He tells People, “It’s given us a chance to slow down and kind of enjoy, I guess the first year of our marriage.” Lauren agrees that quarantine has allowed the couple to grow in their relationship together.

While the two are enjoying the extra time together, Chris Lane admits that he misses seeing his fans on tours. Lauren also misses going with Chris to his shows. She explains that she can tell how much Chris loves performing and wants him to have the opportunity to be back on stage. Lauren adds that seeing him interact with his fans makes her a proud wife.

Chris Lane revealed that he’s been using his extra free time writing new songs. So, be sure to check Country Music Alley for updates on his new releases.