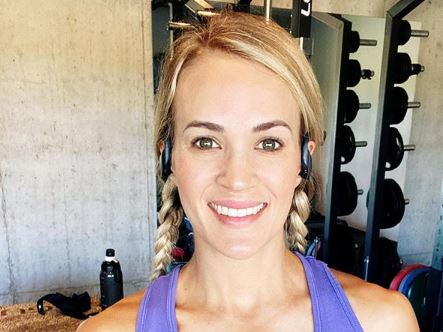 Fans love Carrie Underwood’s new single Drinking Alone, but this song does sound a bit confusing if you don’t listen to the words. Taste of Country shared that Carrie is revealing the meaning behind it. She also had one line she didn’t want to cross while filming the video.

This song is all about a woman alone in a bar. Of course, there is a man alone in the bar too. So why don’t they just drink together? Carrie wrote this song along with songwriters David Garcia and Brett James.

Carrie talked to her record label, UMG Nashville and shared how she didn’t want this video to end.

“I was like, ‘I don’t want her like going home with him. I don’t want any of that. I just want it to be like, ‘Okay we’ll just hang out. We’ll drink. We’ll maybe share a corner booth kiss.’”

The thing is Carrie never wanted them to leave together. Because of what she wanted, that is how they did the video for Drinking Alone. Fans love the way it turned out too.

Carrie went on to share a bit more about how they wrote the song after coming up with the title.

“I had the title, and we just kind of started, ‘What does this mean?’ … I feel like the title could have gone to a very like sad emotional place, but me being me, I still wanted to have that strong kind of character in there. So, I love the fact that this is a breakup song. ‘I’m here at the bar drinking my pain away. You and me can hang out. Why should we both be lamenting over lost love separately? We’re both here doing the same thing. Let’s just do that together.’”

Carrie Underwood has been busy during quarantine staying at home with her boys and husband Mike Fisher. Luckily, she has been sharing some of her workout ideas with fans. Her husband Mike even had his truck stolen recently, but they were able to get it back. He was lucky to get it back, but fans do wonder why it was in Canada to be stolen in the first place.

What do you think of how Carrie Underwood wanted the video to end? Share your thoughts on this and the song in the comments below. For now, most country tours are being put on hold. Hopefully, fans will get the chance to see Carrie later this year on the road.

Jimmie Allen Puts The APB Out On ‘On My Way’ With Jennifer Lopez
Keith Urban Relies On Marital Devotion For Sobriety?
Carrie Underwood Hearkens Back To Signature Style On New Tune
Kelly Clarkson Listens To Fans & Delivers — Here’s How
Blake Shelton Headlines 2 Major Events, See What