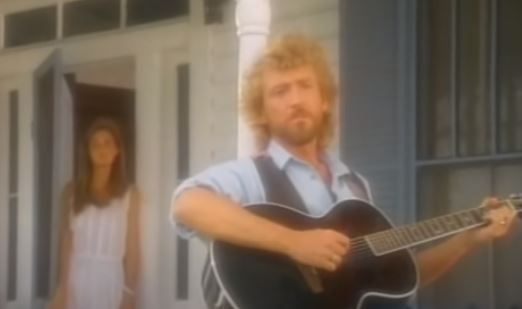 Keith Whitley (July 1, 1954 – May 9, 1989) was a rising star in country music. His untimely death cut short a promising life and career. He had unlimited potential and possibility. Today, which would have been his 66th birthday, we remember the man and the beautiful music he created.

Jackie Keith Whitley was born in Ashland, Kentucky and raised in Sandy Hook, Kentucky. Unlike many country music stars, he was not born into a musical family. His mother, Faye, was an editor of a local newspaper, and his father, Elmer, was an electrician. Despite his lack of musical roots, Whitley showed his potential at a young age.

When he was 15, he competed in a music contest in Kentucky.  One of the other contestants was Ricky Skaggs. Despite competing against each other, the two teenagers became friends. It was due to that contest these two future country music stars were discovered. They were discovered by Ralph Stanley. Both Whitley and Skaggs were soon performing in Stanley’s band. Whitley became the lead singer for this band. That was in 1969. He was with Stanley’s band for two years, performing on the bluegrass album of the year, “Crying from the Cross.”

Whitley went on to perform with other bands, mostly singing bluegrass. J.D. Crowe and The New South was one of those bluegrass bands. He quickly established himself in the bluegrass community and was a rising star in this genre of music.

Keith Whitley released his first solo album, “A Hard Act To Follow,” in 1984. This was his first move towards country music and away from the bluegrass music his career had been based on. This album was considered a struggle to find his voice in country music and let go of his bluegrass roots.

It was during the promotional tour for his album “L.A. to Miami” when Keith Whitley met Lorrie Morgan. Morgan, a country music singer as well, had one daughter, named Morgan, from her first marriage. The two began a romantic relationship. They were married in November of 1986 after a brief courtship. Whitley adopted his new wife’s daughter.

Whitley and Morgan welcomed a baby into their lives less than a year after they married. They named their son Jesse Keith Whitley, who was born in June of 1987. Jesse was the first and only child of Whitley and Morgan. Jesse has followed in his parents’ footsteps and is also a country music singer. Morgan often performs with her son, singing songs made popular by Keith Whitley.

Keith Whitley passed away on May 9, 1989. The cause of death was acute ethanolism, also known as alcohol poisoning. According to the Davidson County coroner, Whitley’s blood-alcohol level was 0.47, which was over the legal limit at the time. It was equal to 20 one-ounce shots of 100 proof whiskey.

Gone But Not Forgotten

Whitley’s career did not end with his death. Lorrie Morgan kept his memory alive by releasing new music from Whitley. Three months after his death, “I Wonder If You Think of Me” was released. Whitley had finished it shortly before he died. Morgan added, “Til A Tear Becomes a Rose.” She replaced the voice of Skaggs with her own for the harmonies. This song won the CMA for “Best Country Music Collaboration” in 1990. It was nominated for a Grammy in the same category the same year.

In 2019, on the 30th anniversary of Keith Whitley’s death, country music stars paid tribute to the late singer. Tracy Lawrence, the late Joe Diffie, Trisha Yearwood, Garth Brooks and others sang Whitley’s songs on the stage of the CMA Theater. His widow also performed to the sold-out theater.

When Garth Brooks took the stage, he explained he and “likely many more of the evening’s performers wouldn’t be in country music” without the influence of Whitley. Skaggs shared stories of their early days together, singing in Ralph Stanley’s band.

There is an exhibit at the Country Music Hall of Fame in honor of Whitley. It opened on April 30, 2019, almost 30 years to the day of his death. Lorrie Morgan, Jesse Keith Whitley and Morgan Whitley, Morgan’s daughter Whitley adopted were there when the exhibit opened.