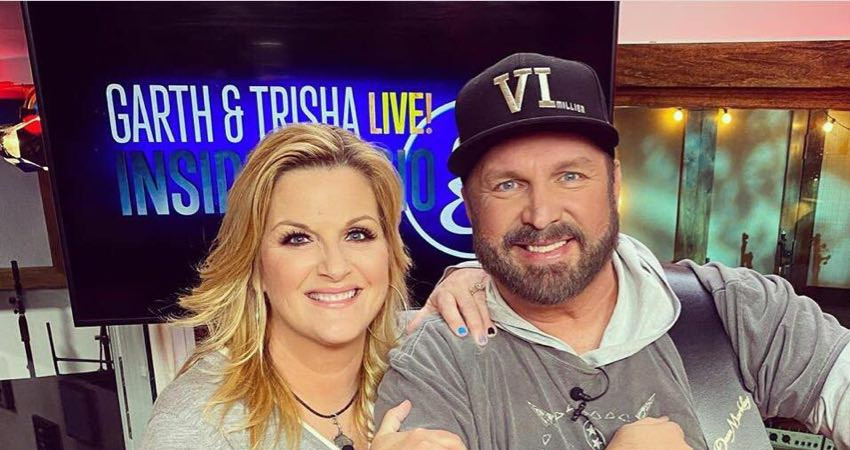 Garth Brooks and Trisha Yearwood have sad news for fans. The musicians put out a statement today, July 6, 2020, announcing that they are postponing their Instagram live-stream event. The much-anticipated event was previously scheduled for July 7.

What we know about the postponed live-stream events

Sadly, Taste of Country reports that “They’re postponing both Tuesday’s live-stream show and July 13 episodes of Brooks’ Inside Studio G Facebook live series ‘out of an abundance of caution.'” The news comes after the legendary country music husband and wife duo learns that there is a potential COVID-19 exposure within their team.

Luckily, Brooks and Yearwood report they are feeling well. However, they just don’t want to take any chances. The news brief also states, “To be smart about this, they are all quarantining for two weeks and thank everyone for their concern.”

Out of an abundance of caution, Garth Brooks is moving his and Trisha Yearwood's July 7th Facebook concert to a later date and postponing Inside Studio G for 2 weeks. While Garth and Trisha are fine, the Garth/Trisha camp has possibly been exposed to the Covid-19 virus. To be smart about this, they are all quarantining for 2 weeks and thank everyone for their concern.-Team Garth & TeamTY

Garth Brooks’ latest single, “We Belong to Each Other” came out in June. When it came time to discuss the meaning behind the single CMT reports, “So when it’s time to say something, I think I’ll put a guitar to it.” Brooks also says during a Facebook Live chat, “and it’ll be something that sounds like, ‘We belong to each other, we are sister and brother, born to love one another.’ Given the difficult times in the world right now, Brooks says, “That’s the kind of message that I want to put out right now.”

It’s OFFICIAL #GarthRequestLive2 acoustic show on 7/7!!! But first, THIS is why I love YOU!!! love, g #StudioG *Click link in bio to watch #StudioG *

What’s Trisha Yearwood up to?

Surprisingly, it’s also been some time since “She’s in Love with the Boy” singer released a new song. According to her Wikipedia discograhpy, the last single released by Yearwood is “Every Girl in This Town” in 2019. However after Lauren Alaina appeared on Trisha’s cooking show, Trisha’s Southern Kitchen, the two powerhouse Country songstresses float the idea of singing together sometime. Shortly thereafter, a new rendition of Lauren Alaina’s song “Getting Good” was released.

I came a-CROSS a little GEM named Izzy who sent me this beautiful necklace to raise money for families dealing with pediatric cancer. I’m sure JEWEL be needing one too. Swipe over to see a beautiful picture of sweet Izzy. My limited edition necklace is designed by Izzy Martin, an amazing, and strong 10 year old girl who is mightily battling osteosarcoma, a type of bone cancer.  Izzy and @hazenandco designed a piece of jewelry that features a gold-filled chain, a freshwater pearl cross, and turquoise beads.  50% of every necklace sold will go to supporting the families of pediatric cancer patients who face many unforeseen expenses related to cancer.  @saloodinc, a Dallas non-profit, has masterfully orchestrated this collaboration.  Visit Hazenandco.com or click the link in my story to order your necklace today💕

Lauren Alaina says, she’s “so thankful” to get to share “such an important message with one of the most important and impactful voices in my life.” Trisha is just as excited, reports Times Free Press. Yearwood says, “I just love the sentiment of this song.” Also, Trisha tells ABC News Radio, “And so there’s something very special about feeling relevant and current in an age where, you know… We’re not slowing down.”  This is in reference to Garth Brooks continuing to tour and in anticipation of rerelease of “Getting Good.”

Luckily, it seems that Garth Brooks and Trisha Yearwood are merely postponing their request-only show. As the duo previouly mentions, the show was originally live-streaming on July 7th. Unfortunately, after learning that a member of their team was exposed to COVID-19, the artist chose to err on the side of caution and undergo a 14-day quarantine.

Keep it tuned to Country Music Alley as this and other country music stories unfold.