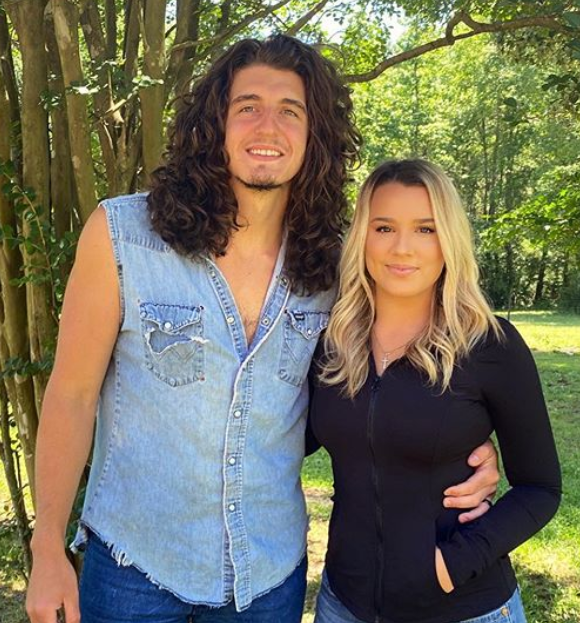 Fans of American Idol may remember the couple from Season 16. Consequently, American Idol host, Ryan Seacrest, reflects insistently on Live with Kelly and Ryan that he saw sparks between the young couple from the beginning. However, to the contrary, Barrett admits that “falling for her now-husband was somewhat of a slow burn,” according to a Taste of Country report.

Foehner appeared on the show early in the relationship and told Seacrest privately that they’d begun dating, Barrett recently divulges more information into the early stages of her relationship with the fellow musician. While Seacrest seems to think it was love at first sight, Barrett confesses to the opposite. “Not exactly on the spot, it took a little bit longer,” she says. “But it definitely came with time.”

While the couple may have married young (Barrett, 19, and Foehner, 23), they have an appreciation for older music. Heartwarmingly, the couple’s first dance was to the 1959 song, “Sleep Walk” by Santo and Johnny. “It’s really pretty. We like older music, so it was a good dance,” gushes Barrett. Barrett and Foehner tied the knot in Cade’s home state of Texas. The nuptials took place in October 2019.

Even though Gabby’s feelings for Cade grew over time, People reports that much of her new record has Cade to thank for its inspiration. Hopeful romantic, not hopeless!” Barrett tells People in an interview shortly after the release of her much-anticipated album, Goldmine. “I’m married! I love romance and talking about love, and I think it’s one of the greatest things you can talk about.”

Surprisingly (and probably for the best), the hit single, “I Hope” is about an ex-boyfriend from high school. She goes on to explain how marriage has shaped her professional life and song-writing style. “I think being married and in love and all of that changed how I write songs and what I want to sign about and the type of songs I like,” she shares.

Some may think that having music and their experiences from being on American Idol together is a solid foundation. However, the young couple is very vocal in their shared religious beliefs. “I hold the Lord so high in my life, to really being number one before anything else,” Barrett says. “I value the Lord more than I value my career because, at the end of the day when we die, we face him. We’re going to wish that we did more on this earth for him. And so I want to make sure that I’m doing everything to glorify him. I think it’s silly that some people are too scared or timid to talk about it. It’s very important to me to include it in my music.”

Significantly, the one track that stands out as the most different from the others, “Got Me,” was co-written with Foehner and three others. This song goes back to Barrett’s gospel roots. She proclaims, “I absolutely love Christian music and I had gotten a lot of requests from fans actually to do a gospel or Christian song.” She goes on to share excitement over being able to release such a song during the trying times of quarantine.

While it may not have been love at first sight, it seems that Gabby Barrett and Cade Foehner are doing something right. Stay tuned to Country Music Alley for more Country news!

Blake Shelton Headlines 2 Major Events, See What
Keith Urban Relies On Marital Devotion For Sobriety?
Maren Morris’ Tour Bus Is Far From Humble
Jimmie Allen Puts The APB Out On ‘On My Way’ With Jennifer Lopez
Miranda Lambert Voted One Of Most Influential People 2022