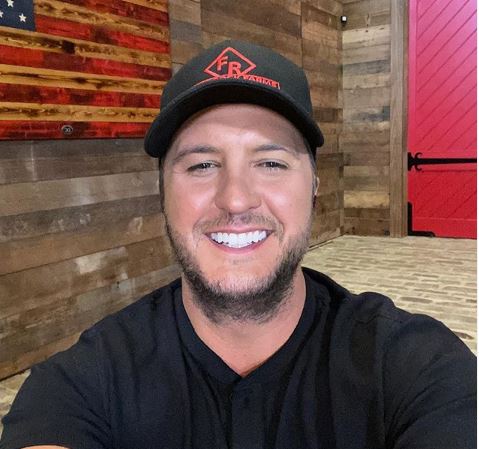 Anyone who is a fan of Luke Bryan knows that he enjoys a good prank. According to reports from Country Now, no one is safe.

Unsuspectingly, the Bryan family dog is not safe from Luke’s shenanigans. The chocolate lab, aptly named, Choc, isn’t even safe.

In the video, Bryan explains that Choc is always begging for food. After fixing himself a sandwich, the “One Margarita” singer queues up his next prank. “Choc stares at me eating. I’m gonna play a prank,” Bryan proclaims as he tosses a tomato into Choc’s mouth. Hysterically, and much to Choc’s dismay a tomato is undoubtedly not what he was hoping for.

Consequently, as Choc begins chewing the tomato, he realizes the is fooled. Ultimately, he spits the tomato out onto the floor. It’s at this point, Bryan and his wife, Caroline (Lina), laugh. Not surprisingly is the fact that Lina is in on the fun and games.

Lina gets hit with the train horn. #quarantine #toottoot

Notably, throughout the course of the coronavirus quarantine, Luke and Lina have become known for the ridiculous pranks they play on each other. Of most recent note is the time that Luke blasted a train horn on Lina. This caused her to fall off of her bike. In retaliation, in a viral video, Lina scares Luke by hiding in and jumping out of a small kitchen cupboard.

Additionally, Country Now highlights Luke and Lina’s celebration of “12 Days of Prankmas.” Assumedly, the Holiday-themed event is a series of pranks they play on each other leading up to Christmas. Yahoo! Life says it best, “it’s clear that the couple that pranks together, stays together.”

One of the memorable pranks from last year’s “12 Days of Prankmas,” is when Luke and Lina recruited the help of Instagram influencer, Chelcie Lynn, and social media star, Officer Daniels.

With the help of Chelcie Lynn and Officer Daniels, the inaugural prank of 2019 is played on Luke’s unsuspecting mother, LeClaire. Ultimately, the prank is named “Trashy Tammy”. Throughout the course of the prank, LeClaire is led to believe that Trashy Tammy is a crazy fan. To sell the prank, Luke runs off.  In the end, everyone gets a great laugh out of the prank.

During these unprecedented times, it is refreshing to see The American Idol coach making the most of a bad situation. It also doesn’t hurt that he keeps a smile on the faces of his fans. Luckily for fans, Luke and Lina document their pranks on social media. Videos of the pranks can be found on Luke’s Instagram @lukebryan and Lina’s Instagram, @linabryan3. To find additional videos of the “12 Day of Prankmas” by searching #12daysofprankmas.

For more Luke Bryan and other Country music news, keep it tuned to Country Music Alley.