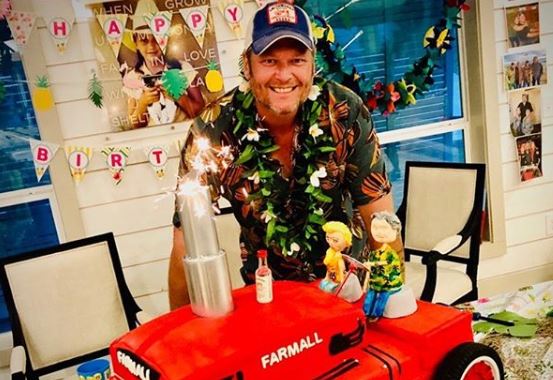 Blake Shelton is speaking out about the possibility of a duet album with his girlfriend Gwen Stefani. Taste of Country shared what he had to say. The fans would love for these two to do more than just the few songs they have done. So far, they have done four songs together. Their recent two duets have done great.

Blake has made it clear that full albums just don’t do what they used to do. You can put out one song and fans will buy it from iTunes. He talked to Bobby Bones about it all on his show. Here is what he had to say.

“It’s hard for me, honestly. The more and more time that goes by I’m starting to wonder why even do an album at all. I’m having a blast just putting out singles.”

So far, Blake Shelton doesn’t have plans for a duet album. Fans are sad to hear this from him. He said, “I don’t think so. Maybe at the end of 10 or 20 years here, we’ll have enough duets together that we can put ‘em all together as a hits package. I don’t know.”

Tonight’s the night y’all! @encoredriveinnights presents Blake Shelton! We had a ton of fun making this for y’all. Here’s a sneak peek of @gwenstefani and Blake performing their new single, “Happy Anywhere.” Stay safe & have fun! – Team BS #BlakeAtTheDriveIn

What has Blake been up to?

Blake Shelton has been enjoying quarantine with Gwen Stefani and her boys. He also just did a concert that was aired at drive-in movie theaters all over. Country Music Alley got the chance to go and check it out. It started out with a performance from Parmalee. Then Blake performed along with special guests Trace Adkins and Gwen Stefani. It was two hours of amazing music. Seeing that live concerts aren’t happening right now, this was the next best thing.

Blake has a home in Oklahoma. When he did his interview with Bobby Bones, he pulled over on the side of the road to talk to him. Gwen Stefani was with him. The two have been spending a lot of time together recently. They will both be on the upcoming season of The Voice as well. The fans love seeing them together and the chemistry between them is undeniable. It has not been confirmed yet when the new season will start airing.

Would you like to see a duet album from Gwen Stefani and Blake Shelton? Maybe if the fans tell him how much he wants it then he will consider changing his mind. Share your thoughts in the comments below.