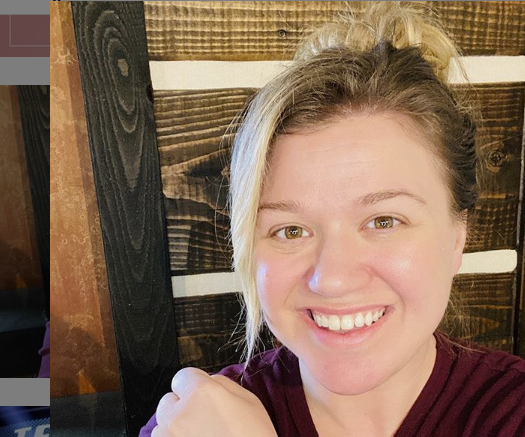 Many of us decided to give ourselves a new hairdo during quarantine. It seems that life is no different in Kelly Clarkson’s household. Kelly recently gave her 6-year-old daughter, River, a stylish new look. She took to Twitter to share with fans:

I put a purple streak in my daughter’s hair today and I swear to you she thinks she is as cool as Prince now 🤣 Full on air guitar, singing at the top of her lungs, that is what’s happening… and before I get attacked for being the worst mom ever, it’s safe, organic paint 🙄

We have no doubt some fans were quick to accuse Kelly of irresponsible parenting. No matter what, there always seems to be at least one person who complains and spoils the fun.

Kelly hasn’t posted a photo yet, but we’re sure River looks absolutely adorable. There’s nothing wrong with having a little fun during quarantine!

Kelly Clarkson is going through a divorce right now, which can’t be easy on her children. If a new hairstyle makes River feel great, we’re all for it.

In June, Kelly filed for divorce from her husband, Brandon Blackstock. He is country artist Reba McEntire’s ex step-son. Apparently, Reba is struggling with the divorce news. Even though Reba split from Brandon’s father, she and Kelly have always been very close. Hopefully, Kelly and Brandon’s divorce won’t hurt her relationship with Reba.

Together, Kelly and Brandon are the parents of River, 6, and Remington, 4. Right now, they’re trying to determine custody. According to Us Weekly, Kelly and Brandon fought a lot during their seven years of marriage. The pandemic certainly didn’t help things.

“And being in quarantine together heightened their problems to the point of no return. So she filed for divorce,” a source told Us Weekly. “Everyone thought Kelly and Brandon had the perfect marriage, but they definitely didn’t. Brandon’s very laid-back, whereas Kelly’s pretty high-strung.”

Children were apparently a hot button issue for the couple. In May, Kelly said she wanted another child, but Brandon wasn’t on board. He has two children from a previous marriage, in addition to the two he shares with Kelly.
“You get baby fever when you see them and you’re like, ‘Oh, I miss the chubby little legs and the little face,’” Kelly said. Perhaps she will get her wish in the future. She’s a very dedicated mom and we could definitely see her having another baby someday. She celebrated Mother’s Day with all four children and posted this on Instagram:

Happy Mamas Day to all of you out there!  I can’t wait to celebrate with some wine and some me time! Because I know this one looks a little different, I am partnering with Carter’s to host a virtual baby shower "ShowHER Love" for 100 incredible mamas and mamas-to-be!  Head over to showherlove.carters.com to enter for your chance to be a part of this celebration. @carters #showherlove #sponsored

“If you’re a mom, you want to be with your kid every day,” Kelly said during a 2016 Redbook interview regarding “mom guilt.” “You don’t want to miss a moment, you want her to need you and want you and not want somebody else. But I think it’s really important not only for my little girl and our 15-year-old girl and our boys to see that a woman is capable of kicking ass while also being a kickass mom. I’m not gonna BS you, that’s hard.”