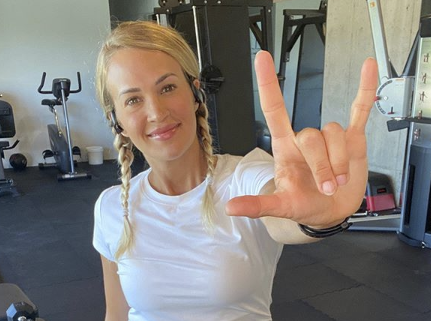 Carrie Underwood recently asked her fans to help settle a debate between her and her husband, former NHL star Mike Fisher. We think it was pretty clear who won that argument.

Carrie won the vast majority of the 95,557 Twitter votes. Her husband, Mike Fisher, will have to live with that. The results are clear. According to Twitter, donuts are only for breakfast. However, we think they could also be for dessert too. Is there really ever a bad time to eat a donut?

After the poll ended, Carrie definitely had the last laugh.

Carrie Underwood and Mike Fisher Are an Adorable Couple

Carrie and Mike met at one of her concerts back in 2008 and they began dating soon after. Mike proposed in 2009 and they were married on July 10, 2010. They have two sons together, Isaiah and Jacob.

On their anniversary last month, Carrie posted a sweet tribute to her husband on her Instagram page.

“These past 10 years have been pretty incredible with you, @mfisher121 !” the singer writes. “Here’s to many many more…without the bowl cuts! I love you and I thank the good Lord that He brought those two kids together! HAPPY ANNIVERSARY!!!!!!!!!!❤️❤️❤️❤️❤️❤️❤️❤️❤️❤️”

Carrie Underwood has always been pretty open about her faith. She famously told CBS Sunday Morning about her three miscarriages and how her faith carried her through the tough times. Mike Fisher also shares in her faith and it’s no doubt a huge part of their marriage.

“Having a relationship with Jesus and making him the center of everything I do is the most important thing to me in hockey and whatever I am doing,” Fisher once said.

If you love Carrie Underwood’s music, we have some really great news with you to share. She announced last month she plans to release a new Christmas album to celebrate the holiday season. 2020 may have been a terrible year so far, but we’re honestly really looking forward to this.

“Now more than ever, we need to focus on what Christmas is about and rely more on our family.” Carrie says in the promotional video. “Even though it has been a tough year, sometimes I feel like the greatest realizations can come at the worst times… And it makes you more thankful for the things that you do have.”

We couldn’t agree more. Fans can pick up Carrie Underwood’s Christmas CD on September 25. You’ll have plenty of time to listen over and over again as you celebrate the colder months cozy and warm at home. Will you grab a copy? Let us know in the comments below. We’re excited to hear what you think.

If you love country music, make sure to regularly check in with us. We’re so excited to share the latest news and updates with you.

Miranda Lambert Voted One Of Most Influential People 2022
Kelly Clarkson Listens To Fans & Delivers — Here’s How
Carrie Underwood Hearkens Back To Signature Style On New Tune
Jimmie Allen Puts The APB Out On ‘On My Way’ With Jennifer Lopez
Keith Urban Relies On Marital Devotion For Sobriety?