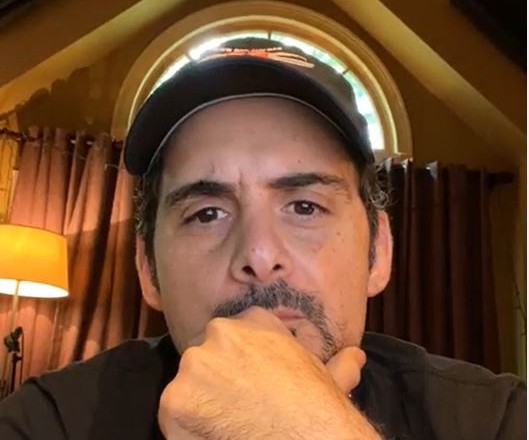 Country music Icon Brad Paisley sings many songs about drinking. However, perhaps few know he didn’t really drink much himself. That is until the coronvirus pandemic came along. Now, his new song “No I in Beer” is bringing people together. Thanks to technology everyone has friends around the world to help get them through quarantine and the pandemic. Brad shares why drinking songs are a big part of this.

CMT caught up with Brad via Zoom to talk about his new song, “No I in Beer.” He actually revealed that even though tons of his song are about drinking, he wasn’t much of a drinker himself. Key word there is wasn’t. Brad goes on to say that kind of changed when the pandemic reared its ugly head.

He said, “I’m a newer drinker. I’m not somebody that you associate with kicking out the footlights at the Opry or passing out in the middle of the encore. I do drink in moderation.”

And, while the song, “No I in Beer,”was written a few years ago, Brad and Kelley Lovelace worked a little to make it fit the times everyone is going through. He said, “When we first wrote this song, the first line was about there’s a bunch of people coming over. But I knew that wasn’t the right sentiment now, and it becomes a much better song when it starts with, wherever you are tonight, whatever you’re going through.”

You invited me to into your parties, your homes, you bounced beers off basketballs, and you’ve made this strange time so memorable for me.
Here’s the video WE made. All in this together, indeed. #Noiinbeer https://t.co/03qTwL2LjY pic.twitter.com/onxop73137

Why drinking is a part of country music

Brad said, “I think that it’s such a meaningful part of country music, and such an important part. And I think it’s so weird to say it, but essentially it’s an important part of this pandemic.”

He continued on explaining himself, “In this time period that everybody’s been inviting everyone into their respective situations, the great equalizer is that a lot of us are drinking our way through this pandemic.” He laughingly continued, “It remains to be seen how many people wind up having to dry out when this is over, but for right now, as we were launching the song, I thought, ’Okay, that is exactly what I mean, that is exactly what this is supposed to be.’”

Brad was able to perform the new song in three states in one weekend thanks to technology. He said he is really glad this pandemic happened now versus the nineties when the world didn’t have many ways to stay connected.

Now, fans can watch the video which includes 235 people from 30 countries. The video features surprised fans receiving a zoom call from Brad. There are also some familiar Country music faces that pop up as well.

Thanks Brad for bringing everyone together.