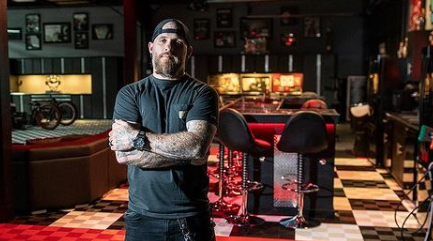 If you’re going to be locked down for months on end it helps to find something to occupy the time. Some people use crafts. Other people finish some home projects that were long overdue. Brantley Gilbert is in the latter category and he got his big home project done. Gilbert talks about his Covid-19 project with affection as he describes how he has renovated his garage into his complete ideal man-cave. Brantley even says that working on this project “kept me from completely losing my marbles”.

Brantley admits that this project has been almost nine years in the making. He has always wanted to renovate his garage into a get-a-way for himself. But with touring and family there has never been enough time for him to take on the entire project. I know what you are thinking because I was probably thinking about it too. I mean the man could literally hire anyone he wants to renovate his garage; so what stopped him?

Well, Brantley Gilbert tells us exactly why. “I’m a little bit OCD, and I like to be very organized, so I really just wanted a place of my own where I knew where everything was and I’m out of my wife’s hair.” He wanted to be completely hands-on when it came to his personal space. I cannot blame him for that. Turns out Brantley’s wife, Amber, has a penchant for home decorating. Gilbert laughs as he says how Amber has made their home a “Southern Living magazine”. And while he appreciates her tastes he wanted something different in this room.

Not a bad “dawg house”

Brantley wanted a fully decked-out man space. He wants it to be “the spot” post-pandemic for music-making, watching sports, parties, or just hanging out. He chose an open-concept with a checkerboard floor and lots of black and silver to tie in the sleek modern aesthetic. Gilbert is a dedicated Georgia Bulldogs fan and chose to name his new space in their honor, and the cave is now the “Dawg House”. But Brantley takes it a step further. “In the South, we call that ‘getting put in the dog house,’ so now there is an actual Dawg House where they can come stay”. Brantley joked how he and his friends will have a place to stay when they are in the “dog house”. So, Gilbert made sure that he included bunk beds in the renovation to make crashing easy.

But though this was Brantley’s pet project it became a group effort. “I drew this place out on little grid paper, and before I knew it, all the guys came down and they brought it to life with their spin on things”. This made the space so unique because everyone contributed and made the place even more special.

“Looking up at everything, I remember who did the trim around the bathroom door, who helped hang up the entertainment system — and any time one of the guys comes over, if they see something that’s not right, they go over to the tool cabinet and they fix it. It’s an ongoing project, but I’m more proud of it than anything because it’s something we built together.”