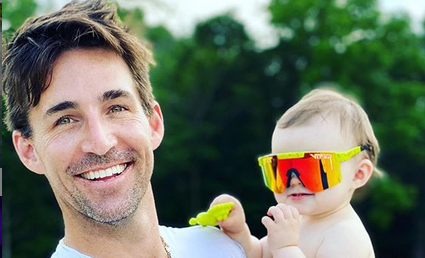 On July 13, Jake Owen released the new music video for his song, “Made for You.” He shared the video exclusively with People, who revealed it on July 15. In addition to clips of Owen’s fans and their loved ones, the video features Owen and his family. The country star discussed the video in a recent interview with People.

“Made For You” music video

The “Made For You” video begins with Jake Owen playing and spending time with his two daughters, Paris and Pearl, and his girlfriend, Erica Hartlein. There are also clips of Owen standing outside while playing the guitar and singing the words of the song.

Then, it cuts to a few recordings his fans sent in. One clip shows a young boy and his parents sitting around a campfire with guitars. Another features a mother on the beach with her baby. Later in the video, there are several more videos of Owen with Paris, Pearl, and Erica.

In June, Owen took to Instagram to ask fans to send in their favorite family videos. He then went through these videos and used several of them in the music video for “Made For You.” Owen told People that it was difficult to decide which videos to include because he had many quality recordings to choose from. He explained, “I was looking for love of all different types and representations.”

Owen hoped that by involving his fans in his music video, more people could relate to this song. He noted that while the song has a deep meaning to him, it may have an entirely different story for each person. He said, “We wanted to feel like people saw themselves in the story because when they adopt it to their own narrative, it becomes part of their story in their lives too.”

Jake Owen discusses how quarantine has affected his family

While many people are stressed out by the pandemic, Owen says that he’s thankful for all the family time he’s had recently. Owen was supposed to go on tour with Lady A this year, but the tour was canceled. He pointed out that when he’s on the road, he only communicates with his daughters via phone. However, lately, he’s been able to spend time with his kids and girlfriend every day.

In addition to extra family time, Owen has been writing more. He now works on songs almost every day. When Owen is on tour, he feels like his routine doesn’t change from day to day. Now that he’s at home with his family, he’s had more time to be creative with his music. He’s also been creating new routines, like taking family walks.

What do you think of Jake Owen’s new “Made For You” video? Let us know in the comments and check Country Music Alley for more country music updates.

Miranda Lambert Voted One Of Most Influential People 2022
Carrie Underwood Hearkens Back To Signature Style On New Tune
Jimmie Allen Puts The APB Out On ‘On My Way’ With Jennifer Lopez
Maren Morris’ Tour Bus Is Far From Humble
Blake Shelton Headlines 2 Major Events, See What