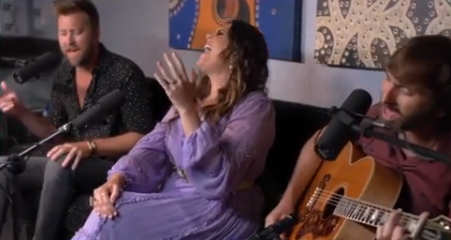 Many artists and celebrities are taking a strong stance against racial inequality. To show their support for marginalized voices in the Black community, bands such as Landy Antebellum and the Dixie Chicks are changing their names. The Dixie Chicks will now be known as simply, “The Chicks.” This change came after Lady Antebellum publically announced they will be known as “Lady A.”

On June 11, the band formerly known as Lady Antebellum posted a statement on their Instagram. They say they have tried to be inclusive of all groups since their formation. However, the current conversation around race relations has opened their eyes. “Now, blindspots we didn’t even know existed have been revealed,” they write. The band carefully considered their options. After much discussion, they ultimately chose to drop “Antebellum” from their name. According to their post, many fans called nickname them as “Lady A” anyway.

Obtaining the rights to “Lady A”

However, Lady A is now in the middle of a legal dispute. They have been attempting to work with singer Anita White to use the moniker but to no avail. She has used the name Lady A in the past. Anita White is a black artist, which complicates matters. The band states they want to be more sensitive to marginalized voices, but is having trouble understanding Anita White’s point of view.

Band members told E! News, “Today we are sad to share that our sincere hope to join together with Anita White in unity and common purpose has ended. She and her team have demanded a $10 million payment, so reluctantly we have come to the conclusion that we need to ask a court to affirm our right to continue to use the name Lady A, a trademark we have held for many years.”

According to the band, they do not want money from Anita White or to prevent her from also using the name. Their only request is for the courts to acknowledge their legal right to the name. The two groups apparently discussed the option to share the name and even collaborate on a few songs. Unfortunately, things fell apart.

Anita White is unsatisfied with the band’s offer. She told Newsday, “I’m not happy about [it] yet again after talking in good faith. … Their camp is trying to erase me and I’ll have more to say tomorrow. Trust is important and I no longer trust them.”

This is one problem with no simple solution. The band formerly known as Lady Antebellum is certainly well within their rights to change their name. But is it right of them to try to claim legal rights to a title already used by another singer? It’s hard to say what will happen, but this is definitely one case we will have to keep our eyes on.

Miranda Lambert Voted One Of Most Influential People 2022
Blake Shelton Headlines 2 Major Events, See What
Carrie Underwood Hearkens Back To Signature Style On New Tune
Jimmie Allen Puts The APB Out On ‘On My Way’ With Jennifer Lopez
Keith Urban Relies On Marital Devotion For Sobriety?