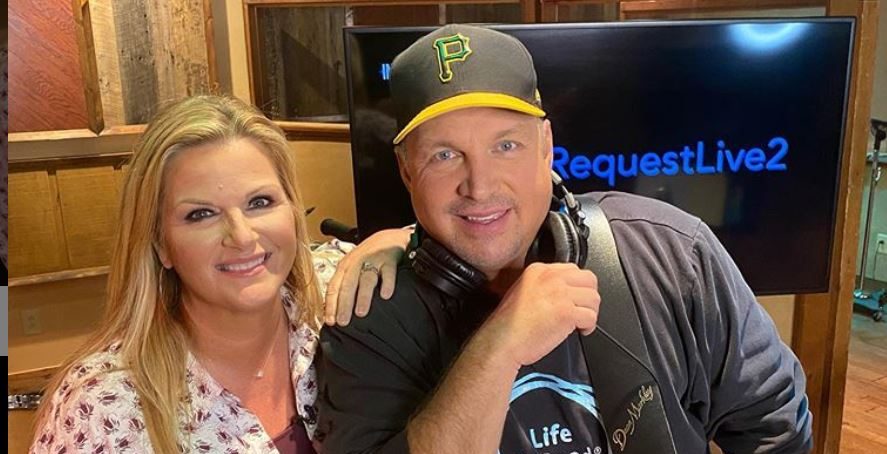 Recently, Garth Brooks and Trisha Yearwood made the difficult decision to postpone a live request only concert event on Studio G.   It was postponed because there were concerns of coronavirus exposure among someone in their camp.  At the time, Garth and Trisha had negative test results. However, the time in quarantine did not prove to be a walk in the park. Garth says, “We decided to use quarantine as a time to face everything, ’cause now you can’t leave, you can’t walk away. This is probably, you know, the blessing and the curse. This has probably been the most we’ve ever gone through as a couple, but what’s on the other side is so great, especially when you are the with the right now.”

Thanks to @kmallard I can go out safely AND still look pretty stinkin cute. Check out her Etsy shop!! Link in her bio @kmallard @kmallard . WEAR A MASK!!! If you don’t want to I completely respect your decision to stay home😘✨

Unfortunately, Garth announced that his youngest daughter, Allie Brooks, 23, with his former wife, Sandy, gave them a COVID-19 scare when she developed a sore throat. She tested positive, but everyone else at the camp tested negative. She only suffered mild symptoms. Understandably, the cause for concern comes from the fact that his daughter’s husband is part of the Garth camp. However, when she contracted COVID-19, Garth says, “As parents like you, like me, all you do is pray your knee bones off and hopefully following the guidelines, so hopefully your family doesn’t have to experience this.” Allie is feeling great now.

Ultimately, Garth Brooks contributes his demeanor during this difficult time to Trisha Yearwood. “If you know Trisha Yearwood, she’s very…she’s in control. And she has been very spot on these six months, and she’s led our family through it.”

Without a doubt, this contributed to the couple growing stronger, not only in their relationship but as parents.

What we know about Allie Colleen Brooks

Fans may recollect that Garth’s youngest daughter is also a Country music singer.  Seemingly, the rising star can hold her own. She recently released a single titled, “Ain’t the Only Hell (My Momma Raised.” Allie’s been releasing singles since 2016. Some of her titles include “Along the Way,”  “Work in Progress,” and she covered her dad’s “She’s Every Woman.” In  2016, she garnished 750,000 views on YouTube with her song, “Close Enough.”

Besides the scare, there’s been a lot to come out of the Garth Brooks camp. Earlier today, the Country music megastar held a press conference. Among things announced was that Garth is withdrawing himself from the award of CMA Entertainer of the Year. Additionally, WKRN reports that Garth Brooks looks to open a bar on Lower Broadway.  “It will be its own place, very much like Blake’s is his own place, and so we are going to do it our way,” proclaims Brooks. Additionally, he says, “Man, talk about Broadway, that is ‘friends in low places’ right there. It’s the perfect place.” Unfortunately, this endeavor may be two or three years down the road.

Make sure to keep it tuned to Country Music Alley for more Country music news.