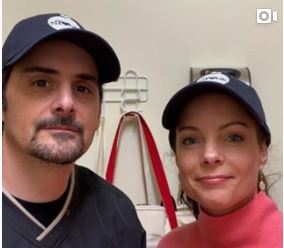 Brad Paisley and wife, Kimberly Williams-Paisley are historically known for their charitable works. According to reports from Bobby Bones and iHeart Radio, the charitable duo are at it again.

iHeart Radio reports that Brad Paisley and Kimberly Paisley are donating “one million meals nationwide.” This contribution is part of their ongoing effort to fight hunger in America. While fans may be quick to think that these donations would only go to the couples’ hometowns, but the one million nutritional meals in various cities nationwide. Paisley explains the importance of their mission, We’re on a mission to help those struggling with hunger and food insecurity.” Additionally, he says, “Due to the pandemic, it’s a real crisis.”

This announcement comes as part of the Million Meal Donation Tour sponsored by Tiller & Hatch. Consequently, Tiller& Hatch is co-founded by Paisley and Williams-Paisley.  In order to distribute the nutritional meals, the initiative uses trucks traveling across the country. During their travels, members of the Tour will donate food to local food banks in 16 major cities. This cities include Los Angeles, New York, Houston, Atlanta, Miami, and Nashville. While the tour kicked off last week in Detroit, it will continue until September 21st. The Million Meal Donation Tour wraps up in Chicago at the Great Chicago Food Depository.

These are tough times, but we're all in this together – and it's important to lend a helping hand when you can. For #HungerActionMonth @tillerandhatch has partnered with @feedingamerica for a Million Meal Donation Tour. More than 54 million people may experience food insecurity in 2020, including 1 in 4 children. Help us help them. Visit tour.tillerandhatch.com to learn how. #EveryMealMatters

It should come as no surprise that Brad Paisley and Kimberly Williams-Paisley are advocates for such a great cause. Organiztions routinely recognize Paisley for his charitable work across the country. Notably, Look to the Stars reports that Paisley established his own charitable fund to aid charities in West Virginia. The Brad Paisley Celebrity Invitational Fishing Tournament happens to fund the St. Jude Children’s Research Hospital.  Other charities of note supported by Brad Paisley include: ACM Lifting Lives, Aid Still Required, Elizabeth Glasser Pediatric AIDS Foundation, Fisher House Foundation, Kids Wish Network, Muscular Dystrophy Association, MusiCare, and the United Service Organization.

This time last year, Taste of Country reports that the free grocery store established by the couple received a $1.5 million dollar grant. The grant is in conjunction with Nashville private Christian university, Belmont University. The Store is a year- round grocery store that provides fresh and non-perishable groceries to people in need. Additionally, The Store is based on referrals from nonprofits and government agencies.

Hey guys, we’re excited to announce that our new favorite frozen food brand, @tillerandhatch, is launching across the country in select @target stores with new recipes including our favorite – Chicken Tortilla Stew. These nutritious meals are designed for a pressure cooker (but can be made in a skillet too!), are super easy to make (even our kids can do it!), and only cost about $3 per serving! Oh, and thanks again to Tiller & Hatch for helping provide meals to @thestore_nashville!

Kimberly Williams-Paisley and her inspiration for The Store

Heartwarmingly, Kimberly Williams-Paisley shares that the inspiration for The Store came after she thought her children were acting spoiled during a California based Thanksgiving in 2018. Once she made that realization, the whole family volunteered the Unity Shoppe in Santa Barbara, California. With inspiration from the Unity Shoppe, the Paisleys brought the idea back to Nashville, Tennessee. Sadly, according to reports from Taste of Country, Tennessee ranks 42nd out of the 50 states for overall health.

Ultimately, Kimberly Williams-Paisley draws attention to the harrowing facts. “Many people who never thought they’d need food assistance are now seeking it, meaning more than 54 million people may experience food insecurity in 2020 including 18 million children.” In doing the math, this sad fact means one in four children are experiencing this hardship.

It’s wonderful to see Brad Paisley and Kimber Williams-Paisley continue their charitable acts amid the ongoing coronavirus pandemic. However, they aren’t the only Country stars know to do so, Look to the Stars also lists Carrie Underwood, Darius Rucker, Faith Hill, Tim McGraw and Rascal Flatts, to name a few. Stay tuned to Country Music Alley as we hope to bring you more positive and encouraging Country music news.