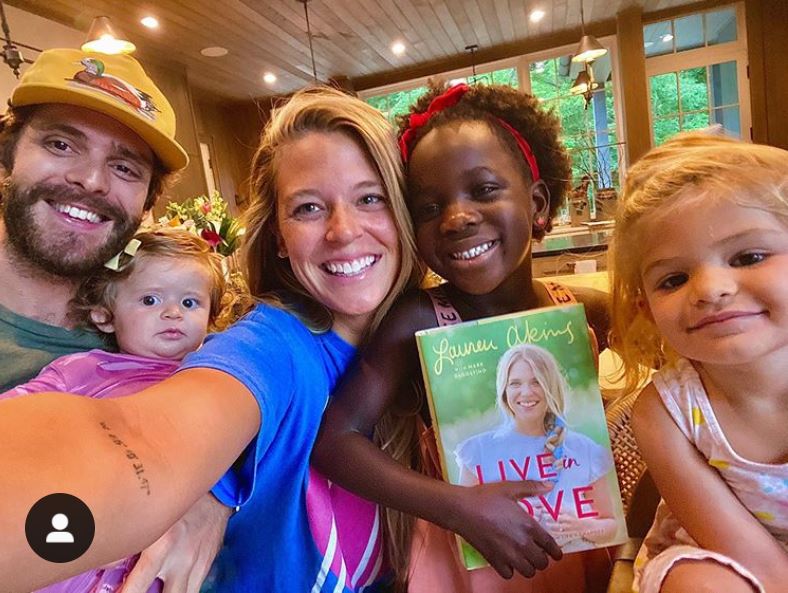 Fans of the Thomas Rhett may be familiar with his oldest daughter, Willa Gray, 4. However, they may not know how he and his wife, Lauren Akins, plan to raise her.

Best-selling author, Lauren Akins, shares insight into how the adoption process went for her and Thomas Rhett to adopt Willa. Consequently, fans can read about it for themselves in her book, Live in Love. The book chronicles a specific instance in the adoption process that was a “hard” moment in their life. Also of note, Lauren was seven months pregnant with Ada James, now 3. Assumably, the international adoption process is difficult. However, it can only be more difficult being dealt with while 7 months pregnant and battling morning sickness.

Remarkably, the above serves as some background about the adoption that brought Willa Gray from Uganda to the United States. Heartwarmingly, Willa was adopted in 2017 and came home a few short months before her sister, Ada James was born.  In an E! exclusive, the Country Music Artist of the Year, shares how he and his wife plan to raise Willa.

It seems that Thomas Rhett and Lauren have their hands full because at a young age people already dote on how smart Willa is. “She is so smart. Even when it comes from school, her teachers… the main thing they’re saying is how intuitive she is and how much she recognizes at a young age,” says the Country star. It’s surmisable that Willa already notices that her family “looks a lot different” from other families. Luckily, Willa’s parents have a plan.

According to the interview with ET’s Nischell Turner, Thomas Rhett says he and his wife are having “open conversations” about similarities and differences of their race and Willa’s race. Ultimately, they want Willa to embrace who she is. Thomas Rhett explains, “I think me and Lauren’s main thing we want to get across is how proud we are and that we want her to group up proud of herself and of her family.” He goes on to elaborate on what that means. He says, “…and to embrace who you are and to embrace your uniqueness and embrace your culture as well. That’s something we want to educate her  on as long as she’s still in our household and even beyond that.”

three little besties in a teepee 💗💗💗

Additionally, People reports on how Thomas Rhett and his family are handling everything that is going on in the news right now with racial injustice and polie brutality. Consequently, Thomas Rhett shares that he and his wife are teaching all of their daughters (Willa Gray,4, Ada James, 3, and Lennon Love, 7 months) kindness. “We just try to preach to our kids to shine your light everywhere you go and realize that the world is cruel, but that doesn’t mean that you have to be.” Ultimately, education is a common theme among how Thomas Rhett and Lauren Akins are raising their children.

Without a doubt, Thomas Rhett and Lauren Akins have their hands full raising three daughters. However, it seems that they have everything under control. Keep tuned to Country Music Alley for more Country music news.