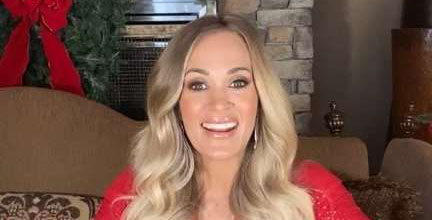 Years after clinching an American Idol win, it’s hard to imagine that Carrie Underwood still “feels like an underdog.” However, Taste of Country reports on some lingering feelings the Country mega-star may still have.

Carrie Underwood is wildly successful, but human, like the rest of us.

Things are undoubtedly a little different this year in the midst of an ongoing international pandemic. However, on the more cheerful and festive side, things are also different for Carrie Underwood fans. The Country music phenom releases her first holiday album My Gift. There is an accompanying television special on HBO. Not to mention, her unprecedented joint win for ACM Awards’ 2020 Entertainer of the Year.

Since her Season 4 American Idol win in 2005, it seems that Carrie Underwood has enjoyed success after success. In a recent interview with Apple Music’s Zane Lowe, the “Jesus Take the Wheel” singer discusses her “unceasing ambition.”

Join me beginning Dec 3 as I bring the music from #MyGift to life by performing the entire album with a full orchestra, choir, and a few surprises, on my new @hbomax Christmas special! I’m so proud of how this turned out and cannot wait for you to see it! #MyGiftHBOMax 🎁✨ pic.twitter.com/7nRmK5BkRo

What is her motivation?

While it’s hard to imagine Carrie Underwood as an underdog, the artist seems to explain that that feeling is what motivates her to want to be the best. However, having an extremely competitive nature doesn’t hurt the cause any. “With my competitive nature, if you look at yourself as the underdog, it makes you want to work a little harder,” shares Underwood.

As Carrie Underwood fans recognize, each of her albums has a different feel to them. Luckily for fans, Underwood gives insight into her thought process. “With each album that I’ve [made], it’s been a different feel, a different look, a different vibe – and I love that.” While that may seem like enough justification to her artistic process, she doesn’t stop there. “I would get bored if I made the same album over and over again,” the “Before He Cheats” singer shares.

Admirably, Carrie Underwood gives substantial insight into her artistic process for each album. Notably, it seems that she uses any negativity that’s thrown her way as motivation to do better and prove them wrong. She acknowledges this in saying, “no matter what you do, there’s going to be somebody out there that [doesn’t like you]. But it doesn’t matter.” It seems that she grasps that you can’t control other people, you can only control how you act.”

Underwood says, “It doesn’t matter what the negative thing is – I want to prove them all wrong.” Furthermore, she shares, “And I still try to win people over as far as getting up and just trying to nail it.” Seemingly, like anyone with ambition, it appears that she’s chasing a feeling. “And one day, I want to drop the mic. I want to be like, yes.”

Luckily for Carrie Underwood fans, it seems they will always have something new to look forward to from their favorite Country artist. Have you listened to My Gift yet? What did you think? We’d love to read about it in the comments section below. Come back to Country Music Alley for more news about your favorite Country artists.