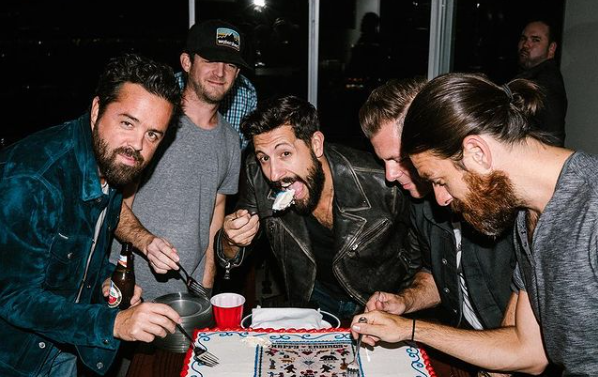 The boys from the country ensemble group Old Dominion recently let fans in on a little secret. Sometimes, they often forget the words to their own songs.

On Wednesday, the fellas from Old Dominion posted a short video on their Instagram from what appears to be a recent holiday party. In the short clip, band members Brad Tursi, Trevor Rosen, and Matthew Ramsey are giving what appears to be an impromptu performance for friends and family in attendance. Accompanied by only an acoustic guitar played by Brad Tursi, the trio sang a stripped-down version of one of their songs.

The performance seems to be going well – at first. Seconds into the video, fans get a good giggle watching lead singer Matthew stumble over the band’s own lyrics. He then adlibs in various words and sounds in order to keep the song going and try to keep up. The stunt seemed to work for a minute, and the trio launched into the three-part harmony that signifies the song’s chorus. A few bars in Matthew broke started laughing and waved his hands at his bandmates to signify he couldn’t continue.

Along with the short video, the band added a caption that read, ‘Just because we write em doesn’t mean we always remember em #neverbesorry‘ This quip is actually quite funny when you consider the history of the band’s members. All five men that make up Old Dominion were actually songwriters before this collaboration. Before they started writing and performing their own music, all had a hand in some great hits sung by other artists.

So, keeping the band’s history in mind – the caption now reads more like – ‘Well, we’ve written a lot of songs – you can’t expect us to remember them all.’

OD fans and followers took to the comments to laugh with the band and to send them well wishes and encouragement. Some poked fun and wished them a happy holiday, others commiserated about their own bad memory. One user even jokingly pointed out that their bad memory must be the reason that they turn the mics around during concerts for the fans to help them sing along.

Another OD fan let them know that despite the flub up – that this song was still a favorite and that they were just singing along with the song in the car earlier that day.

Band Celebrates Successes of the Year Despite the Pandemic

According to Roanoke, the band had a remarkable year on the charts – despite the Covid pandemic keeping them away from fans. Unfortunately, the band’s plans to tour this year were thwarted early on by CDC restrictions on gatherings. That,  however, didn’t stop Old Dominion from dominating the country music scene. The band was recently celebrated two Grammy Award nominations for their song ‘Some People Do.’ The catchy song was an impromptu collaboration between Matthew Ramsey and fellow country artist, Thomas Rhett. The title was the result of a conversation the two artists had just after a group writing session. 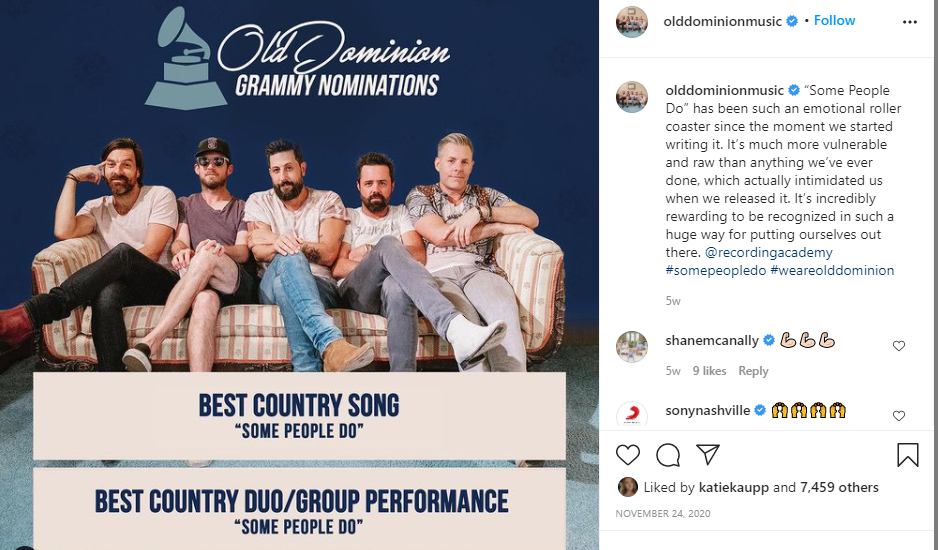 In their interview with Roanoke, Matt explained to the publication that he and Rhett were talking about life on the road. Rhett asked Ramsey “Man, who really likes the county fairs?”

Matt answered, “Some people do.”

The phrase immediately sparked Matt’s writing spark and he immediately sat down at the piano and began to bang out what would become the group’s Grammy-nominated hit.

It seems that the song is well-loved by not only fans but their industry colleagues. The song has received two Grammy nominations this year for “Some People Do”. Old Dominion accepted nominations for Country Song of the Year and Best Country Duo/Group Performance.

Find out the results during the 2021 Grammy Awards on January 31st. The award ceremony will air on CBS.

Looking forward to Seeing all the Grammy Results this year? Stay tuned to Country Music Alley as the month goes on for all the breaking news on your favorite nominees!