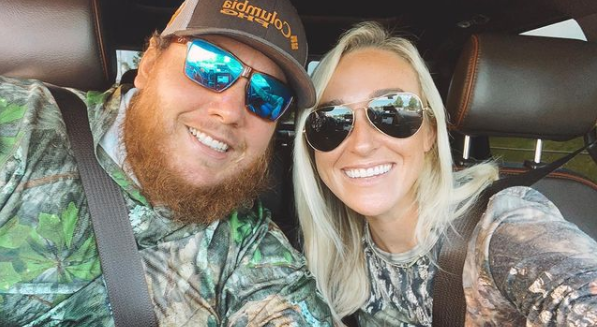 So, an unpopular opinion is that 2020 was really not that bad. While a global pandemic is horrible and the gravity of the situation should not be minimized, the year had bright spots for many people that made 2020 special. Part of what made 2020 meaningful was the chance to slow down and appreciate life, family and friends. Luke Combs didn’t like not touring last year but appreciated the time he had off. The couple took advantage of the time to get closer and spend almost every day together. He said, “We have spent so much time together just this past year.”

The country lovebirds actually have an everyday love story. Luke and Nicole were introduced in 2016 by mutual friends before Luke made his breakthrough in country music. Luke’s career took off after they met with his first single “Hurricane.” Luke has said before, “I didn’t have anything when we met.”

Nicole moved to Nashville from Florida after school and she works for Broadcast Music Inc. Nashville. While working with BMI she met several A-list performers and she helped Combs as he moved up in the industry. But with both their jobs being busy they have not been able to spend as much time together as they like. But she made an effort to go on Luke’s tours as much as possible. He said, “I worked a full-time job, and he was on the road full-time. I’d see him maybe twice a week.”

Nicole talked about all the time together being important for their relationship. He said, “The year before we got married [2020] and then, of course, this year, we got to spend basically every day together. It’s solidified that, obviously we’re great together. And we can make it through a lot.” They added even added a fur baby, rescue dog Jojo, to the mix last year as well as some chickens.

Luke and Nicole said “I do” in Florida on August 1, 2020. And after all the time together over the last year, they are looking to start a family. They said, “Obviously, we want to start a family. So, whenever the good Lord decides to let us do that, that would be fabulous. But who knows? We’re truly taking it day by day at this point.”

Luke jokingly added, “We’re winging it. For now, we’re just trying to figure out what we’re having for dinner tonight.”

Luke Combs released his latest single “Forever After All” as a celebration of his love for Nicole. And the song rounds out a three-part series for his wife that started with “Beautiful Crazy,” followed by “Better Together.”

“Forever After All” was originally released on his What You See is What You Get album. This single debuted at number two on the Billboard Hot 100 charts. And if the surge from radio airplay continues Luke Combs is likely to have his eleventh consecutive number-one hit.