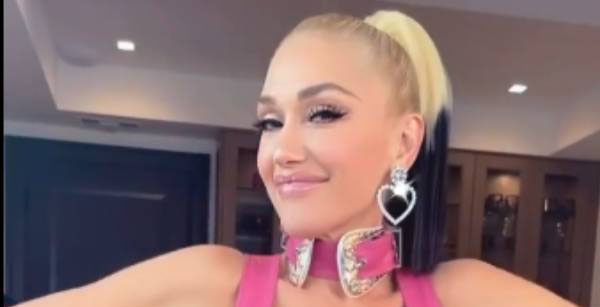 With all the stunning photos that Gwen Stefani shares on her Instagram, it’s hard to believe that Blake Shelton’s wife-t0-be is 51 years old. By no means does the “Let Me Reintroduce Myself” singer’s latest Instagram post look like an intentional thirst trap. However, it might break the internet none the less.

In her latest post, Gwen Stefani is lounging on an cream colored vintage, Victorian couch. She’s also holding the headset to a classic rotary style phone. Stefani stuns in her two-piece leopard printed lounge wear. In just six hours, the photo has amassed over 54k likes.

The caption is a simple, “u rang?” Without a doubt, this has fans feeling some sort of way. From what fans know about Gwen Stefani, this feels like a little bit more than a “felt cute, might delete later” moment. However, it doesn’t seem like there are any additional clues in the comments.

While there may not be any clues as to what the photo and caption means in the comments, there is speculation that this is a hint towards new music. After some sleuthing, there doesn’t seem to be anything to prove or disprove this speculation. Sadly, this theory seems like only a time will tell sort of situation.

So this photo may not have a clear purpose, but it does offer fans some peace of mind. Gwen Stefani recently posted a photo on her Instagram with a drastic and bold new look. While daring fashion choices aren’t anything new for the mega star, she usually keeps one thing the same. Fans are hard-pressed to think of a time when Stefani gave up her iconic platinum blonde locks.

What is the “Happy Anywhere” singer up to?

Fans may be a little sad still. Season 20 of The Voice doesn’t include Gwen Stefani. She switched out with Nick Jonas again. But that wasn’t before taking home her first win with Carter Rubin.

Also keep an eye out for Gwen Stefani and Blake Shelton at the Academy of Country Music Awards on April 18th. She recently teases that she’ll be performing with her future hubby.

How do you feel about Gwen Stefani’s recent Instagram photos? Let us know in the comment section below. Come back to Country Music Alley for more news about your favorite Country stars.

Miranda Lambert Voted One Of Most Influential People 2022
Carrie Underwood Hearkens Back To Signature Style On New Tune
Jimmie Allen Puts The APB Out On ‘On My Way’ With Jennifer Lopez
Maren Morris’ Tour Bus Is Far From Humble
Keith Urban Relies On Marital Devotion For Sobriety?