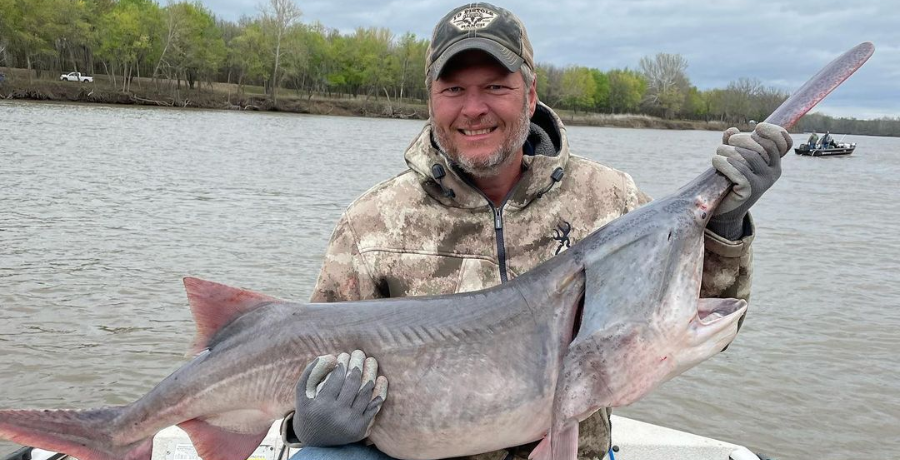 Blake Shelton recently invited a furry friend over for dinner. Country Music Alley previously reported that the country superstar is getting ready for spring. He upgraded his tractor and is getting ready to tend to his farm. He also got back to fishing once again.

Blake has been spending most of his time at his Oklahoma ranch. He quarantined there with fiance Gwen Stefani and her three sons. Since spring is now in full swing, Blake is embracing the great outdoors. That includes inviting a furry friend into his home.

Find out who broke into his home and invited themselves to dinner.

On Tuesday, April 14, Blake Shelton was in the middle of making dinner. The singer was in the mood for some smoked meat, and then a wild animal snuck into his backyard. He took to Twitter to share a clip of the critter crawling around the stove and sink of his outdoor kitchen. In the caption, Shelton joked: “Guess I’m making a frozen pizza…”

The hilarious clip amassed over 6,000 likes and over 200 retweets. In the video, Shelton tells the animal, “Am I interrupting you, or are you here to get the food that I smoked…? But I’ll wait until you’re done. That’s cool.”

Fans took to the comments section to find out who Shelton’s new furry friend was. Is it a rat? A ferret? Some eagle-eyed people noticed it was a possum. They love to come out at night and they can disrupt backyards, especially if you’re smoking food outside.

In a follow-up tweet, the “Minimum Wage” singer said he “made a new buddy.” He found himself taking kindly to the little hungry fellow. Blake Shelton returned to social media to share a new clip of his new furry pal crawling around the balcony. The Voice coach took it upon himself to pet the little guy, but he warned his fans not to do the same – especially under the influence of alcohol.

“But at least I made a new buddy!” Blake Shelton wrote in the caption. “(Also I don’t recommend petting wild animals… It just so happens that I have the vodka reflexes of a rattlesnake!!!!)”

But at least I made a new buddy! (Also I don’t recommend petting wild animals… It just so happens that I have the vodka reflexes of a rattlesnake!!!!) pic.twitter.com/ThjFUzMIlK

Fans remarked how lucky Shelton was that the possum didn’t bite him. One fan noted that possums have sharp teeth. One false move and Shelton could find himself at the emergency room needing a rabies shot. Since Shelton is used to the outdoors, he knows how to handle wildlife.

Unfortunately, his little friend made a quick getaway. Apparently, he didn’t warm up well to Shelton’s touch, which is hard to believe. Only Gwen Stefani enjoys Shelton’s embrace. The couple is reportedly planning their summertime nuptials.