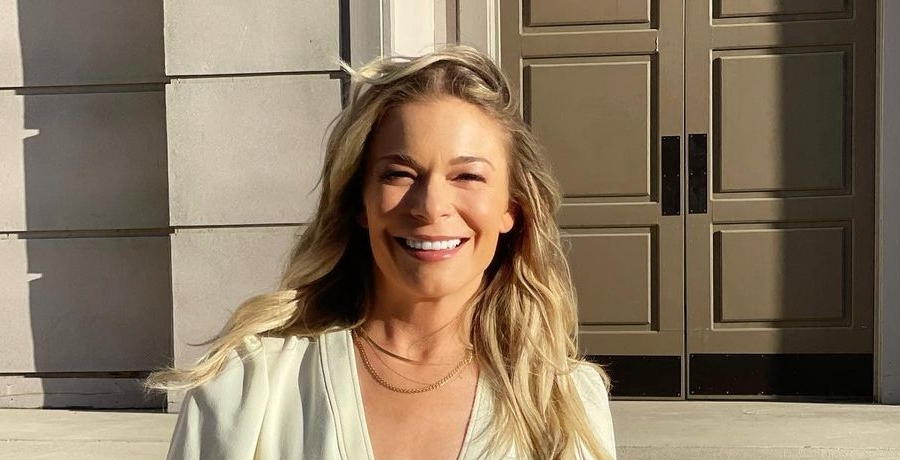 Country music legend, LeAnn Rimes has been very busy lately. For example, she recently appears on The Masked Singer. Also, from the looks of her toned physique, she’s staying on top of her workouts. However, that’s not all LeAnn Rimes has up her sleeve, it involves a new show. Keep reading for find out what secret LeAnn Rimes has been keeping for a couple of weeks now.

LeAnne Rimes shares a secret she’s been keeping for weeks

LeAnne Rimes recently shares a photo of herself with Chrissy Metz (This Is Us) and Mark Montano, an interior designer. Notably, that isn’t a trio of people that you would normally expect to see together. However, it’s for good reason. LeAnne tweets, “I’m having the best time on set with @ChrissyMetz & @MarkMontano.”

This photo isn’t just of a couple of pals hanging out. It accompanies a major announcement. LeAnne shares the following in the tweet. “I can’t give too much away yet but I’m so excited to share this news with you. The secret project we’ve been shooting these past few weeks is for a news show on @discoveryplus called ‘Meet Your Makers Showdown’.”

I can’t give too much away yet but I’m so excited to share this news with you. The secret project we’ve been shooting these past few weeks is for a new show on @discoveryplus called “Meet Your Makers Showdown”. I’m having the best time on set with @ChrissyMetz & @MarkMontano! pic.twitter.com/SGxLw8oONi

discovery+ details the concept behind Meet Your Makers Showdown

discovery+ explains the concept behind their new series. They describe the series as being hosted by “Emmy® and Golden Globe® nominated actress, recording artist, and crafting enthusiast, Chrissy Metz.” Not only does Metz have all of those records but she used to be a preschool teacher. Additionally, Metz is an avid scrapbooker.

For now, Meet Your Makers Showdown is six one-hour long episodes where people compete in craft competitions. LeAnne Rimes comes in to “lead fellow judges on a walkthrough among contestants that delves into each artist’s creative process, uncovering what makes them tick.” As for Mark Montano, he evaluates “each maker’s technique and originality.”  The winner of the competition takes on home $10k.

LeAnne Rimes announcement about Meet Your Makers Showdown is well received in the comment section of the tweet. Everyone seems excited to see LeAnne work with Chrissy Metz. Many of the comments proclaim how This Is Us is their favorite show. Interestingly enough, there is no mention of Mark Montano. This kind of begs the question if people know who Mark Montano is.

Are you excited to see LeAnn Rimes on Meet Your Makers Showdown on discovery+? Let us know your thoughts about this new show in the comment section below. Also, make sure to come back to Country Music Alley for more news about your favorite country stars.