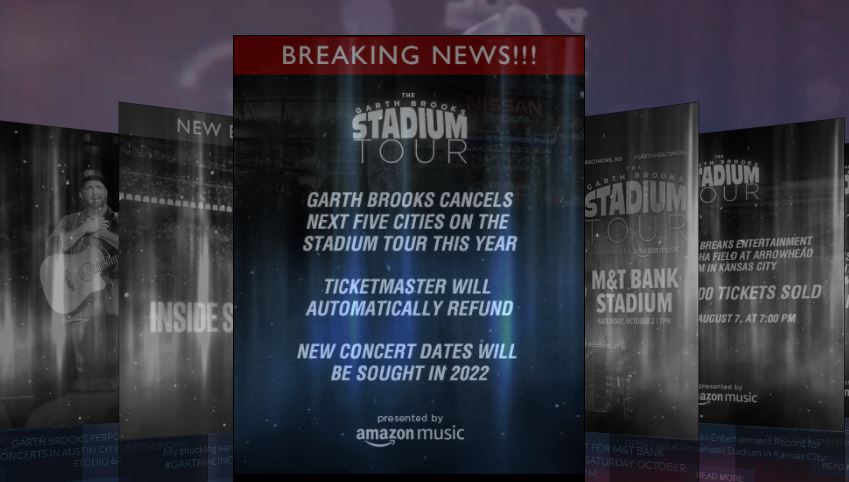 Garth Brooks has had to cancel dates on his summer tour.

Out of fears that COVID variant Delta has caused a severe uptick in new cases and spiked mortality rates for this virus. Today Garth Brooks revealed an announcement on his web page after the country music star played for 90,000 fans at Memorial Stadium five days earlier.

And for the ticket holders, no action is required to obtain a refund as Ticketmaster will automatically issue a refund to the original method of payment the ticketholder used when they made the purchase.

“In July, I sincerely thought the pandemic was falling behind us. Now, watching this new wave, I realize we are still in the fight, and I must do my part. I have asked the wonderful cities of Cincinnati and Charlotte to wait too long, and I don’t want to now do that same thing to the great folks in Boston and Baltimore. As far as Nashville, we are looking for a make-up date from the July rain out, and though this is not COVID related, to make them wait makes me sad, as well. So, it is with a heavy heart we announce the decision to cancel all 5 shows, but with a hopeful heart, we will reschedule and start over when this wave seems to be behind us,” said Garth Brooks on his website.

“The joy I have seen in everyone’s faces as live music returns has been more than worth our constant diligence to maintain safety protocols not only for the fans but for our band, the crew, and the hard-working staff in these stadiums. Their dedication to safety for the people who fill those seats has been a miracle to watch and a blessing to receive. I am truly grateful,” Brooks said on his statement page on his website.

A spokesperson for Brooks and the tour says they all will continue to monitor the spread of COVID and watch how schools, sports, and other entertainment entities handle these events in this crisis time.

“I’m sincerely hoping we are back on tour before the year’s end,” said Brooks on his website. “With that said, the most important thing to me is fulfilling my end of the Stadium Tour by making sure every show is doable before putting tickets on sale. That is why we pulled the Seattle on sale and making sure the environment these people are trading their time and money to put themselves into is not only the best experience ever but also the safest one we can provide.”

The show began in Vegas

Brooks kicked off the tour in Las Vegas, as 68,000 people gathered at Allegiant Stadium in Las Vegas.

In a press conference that was transcribed by Rolling Stone, Garth said of his return that he was ready to perform as June 1st, vegas had lifted all its pandemic restrictions.

Brooks said: “I think what you have here is to show some kind of fricking responsibility, right? Now you have an obligation to the rest of this industry to say, ‘This is what we’re doing, this works for us. How about you guys?’ We’re taking all the precautions that we possibly can to make sure that we’re doing our part. Then the rest of it you just kind of throw up to fate and the common sense of the people you’re playing for, and I really hope that that message gets across, that if you’re going to do it, do it responsibly until we can get back to being real musicians and not having to be responsible.”