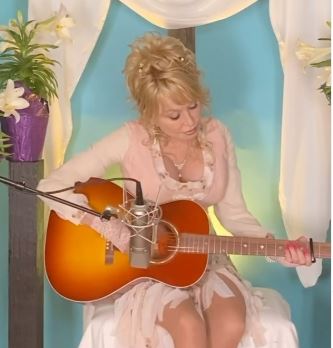 Dolly Parton has a beloved song entitled “Try” from her 2014 album, “Blue Smoke.” The superstar singer-songwriter never lets despair distract her from life. Not even the coronavirus pandemic can keep the petite dynamo of entertainment from reaching out and doing good as she keeps hope alive.  Dolly is doing a lot more than trying, and so are her fans.

Despite being busier than a borrowed mule, as the lady from Sevier County, Tennessee might say, Dolly Parton has more projects in the works than one woman can handle– except for her.  The news came from the local 10 News per WBIR on June 18 that Dolly Parton’s Stampede will reopen just in time to celebrate our nation’s birthday, and fans are circulating a petition to celebrate the country music icon in a very meaningful and lasting way.

Dollywood didn’t officially become Dollywood until 1986, when the savvy businesswoman partnered up with Herschend Family Entertainment, and ultimately expanded what was Silver Dollar City into her own biographical journey of attractions, big enough to be its own zip code over 150 acres.

Dolly Parton’s Stampede is rootin’-tootin’ family entertainment that features 32 horses (and riders) performing precision barrel racing, leaps through rings of fire, and numerous other tricks.  The Pigeon Forge attraction will open July 3 at 50% capacity.  All seating is redesigned to ensure that guests stay 6 feet apart.  The facility is deep-cleaned every night, and food preparation areas follow the strictest CDC and state health and safety guidelines.

The home-style meals served at Dolly Parton’s Stampede reflect something of her childhood on their finest holiday dinner.  Guests enjoy a whole rotisserie chicken, barbecue pork loin, vegetable soup, corn on the cob, and specialty desserts.   Let’s hope the equestrians and their animals at least get extra apples and carrots.  Tickets are $57 for adults and $30 for children, with the meal included.

It’s timely to mention that the property ultimately purchased by Dolly Parton was once called “Rebel Railroad” back in the day.  The Black  Lives Matter movement has prompted awareness in all cultures that Confederate symbols and ideologies should no longer be tolerated, much less celebrated.

In light of the current social awakening sparked by the tragic killings of George Floyd and Rashard Brooks, many Dolly Parton fans have started a movement of their own to create and dedicate a monument “to honor a true Tennessee hero– Dolly Parton.”  The words extol the Guinness World Record-honored artist’s “philanthropic heart, ”which “has unquestionably changed the world for the better.”  The altruistic petition has already collected more than 16,000 signatures and garnered political and celebrity support along the way.

Political affiliation aside, Sen. Ted Cruz endorsed a proposal to replace slave trader and KKK founder, Nathan Bedford Forrest, with Dolly Parton.  The Congressman concurred that the plan was a “win-win.” Another ally, Henry Winkler, gave his full approval, writing on Twitter: “Now that is right. Dolly is a treasure.

Now that is RIght .. Dolly is a treasure https://t.co/v4AiH6wWQW

The philanthropic country queen was one of the first celebrities to stop talking and start doing to solve the coronavirus crisis.  She quickly put her money where her mouth was.  Dolly donated $1 million to Vanderbilt University to fund the initiative “Build a Bridge to Save Lives.” It aims efforts toward the development of effective treatments until a viable vaccine is found.

The songstress looks for the “God-light” in everyone, and her latest song, “When Life Is Good Again” brings sweet, sonic healing to soothe any troubled soul.

Released last month, the anthem pledges “I’ll be a better friend… a bigger person then” in the opening verse.  The accompanying video is a montage of many front-line workers intermingled with family memories.  The message is clear that the only moment anyone truly has is the present one, and it’s too easy to promise change, without following through to live it.

Dolly Parton is ready to do some more living, loving, and giving the world hope and joy until every person on the planet is healthy and whole again.  Her fans have it right in another passage for her statue petition, offering “Let’s replace the statues of men who sought to tear this country apart with a monument to the woman who has worked her entire life to bring us closer together.”

See you soon. Dolly, on stage, at the Stampede or standing lovely in bronze or stone!