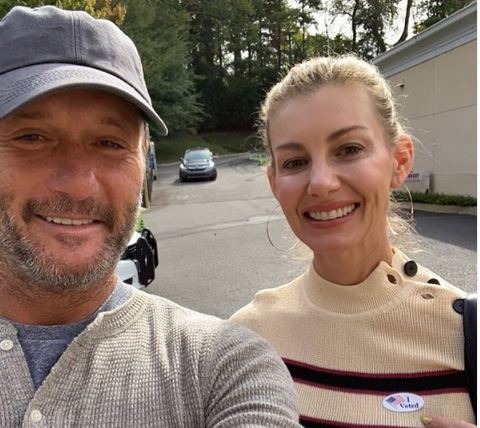 Country music superstar Faith Hill is probably waking up this morning with a big smile and a soaring spirit.  The reason behind her joy is not rooted in a chart-climbing song or an upcoming stint on tour, but instead, from the action of Mississippi state lawmakers to finally surrender the vestiges of the Confederate flag, symbol, and ideology from the banner following a decisive vote, as reported yesterday, June 29, by the Atlanta Journal-Constitution.

Faith Hill generally saves her moving and shaking for her time on stage. The stunning 52-year-old still has the pipes to bring listeners to their knees.  Last weekend, however, as People reported, Faith Hill let the power of her words resonate without any melody.  Her passion was fierce as she pleaded with her home state to adopt “ONE NEW FLAG,” one that represented all citizens of Mississippi. She wanted one that reflected the relevant cry of today’s society in pursuing equality and social justice.

There’s no place for reminders of terror, Faith Hill stresses

In her opening words on Twitter, Faith Hill conceded that some hang onto outdated symbols, feeling that they reflect a sense of “heritage and Southern pride.”  It didn’t take long for the passionate wife, mother, and hit-maker to hit her followers with the truth.  She implored people to realize that the (now former) flag features “a direct symbol of terror for our brothers and sisters.”

To the Mississippi legislature: It’s time to change the state flag.

I am a proud MS girl and I love my home state. When I think of Mississippi, I think of my mom and dad, the church I grew up in, high school football, and where I fell in love with music.

The straight-talking soon brought big support across media and from followers for Faith Hill.  MSNBC anchor, Joy Reid, gave Hill big kudos as she made the rounds for “Who Won the Week,” on her show, and frequent guest and columnist, Kurt Bardella, who was on the panel, praised Faith Hill for her courage and bold stand for conscience in his online country music channel, “Morning Hangover.” Bardella has also interviewed Faith’s husband, Tim McGraw, on the show.

Faith Hill isn’t forgetting all she loves about her state.  She’s only echoing that the time is now for change.   She declares herself as “a proud MS girl and I love my home state.”  Her recollections of Mississippi call to “mom and dad, the church I grew up in, high school football, and where I fell in love with music,” in her own words.

“Now, it is time for the world to meet the Mississippi of today,” Faith Hill urged, as opposed to 1894 when white supremacists embedded the Confederate symbol to impose social servitude on those who had just broken chains of slavery.

The Mississippi Senate voted 37-14 to retire the flag hours after a House vote of 91-23.   Cheers rang out from those gathered at the state capitol in Jackson.  Faith Hill is a long way from Jackson or her hometown of Starr, MS, but her happiness will surely audible from the Nashville area.

Senator David Jordan spoke for unity, pleading “Let’s do this because it’s the right thing to do,” Representative Robert Johnson choked back tears as he described the empathy between white and African-American members in the state congress.

Faith Hill’s 2005 hit, “Mississippi Girl,” reminded that someone with genuine roots and real values “ain’t big-headed from a little bit of fame.” That kind of character is a virtue, but it doesn’t mean that Faith Hill and Tim McGraw don’t make the most of the platform they have.  They also pass on a legacy of giving to the next generation.

Anyone who asks Tim McGraw about faith Hill’s most wonderful quality will always get the same answer, to just “watch her with our girls,” as the emotional dad divulged in Oprah Winfrey’s Masterclass.

The couple’s three daughters are grown women now. They still see mama and papa taking stands the way they Faith Hill did for the revamp of her state’s flag, and how Tim McGraw gave vocal support for the ban in the sale of assault weapons in 2018.  The pandemic clearly isn’t stopping this pair from doing their part. Tim participated in three major virtual concerts in two months, with some delightful acoustic renditions.

Mom and dad also helped out their daughter, Maggie, in her work with “Feed the Frontline” last month.  The parents performed a luscious version of Alabama’s “Feels So Right,” and spread the word so that a few more country superstars joined in the initiative to support so many who are again saving lives in another peak of the siege.

Faith Hill, Tim McGraw, and the girls keep making a difference as their family tradition.