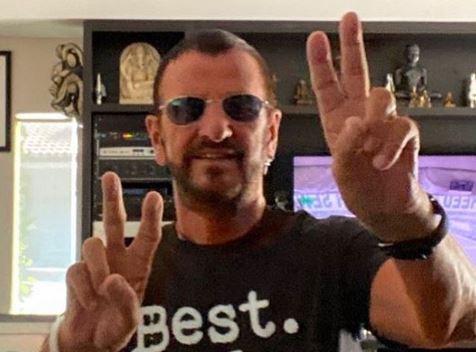 Ringo Starr is the global ambassador for “peace and love,” as the percussion icon constantly reinforces in word and deed.  Today, the Beatles’ drummer is being bombarded with more love than his big heart and 5 million drum kits can hold on his 80th birthday, and Ringo Starr is still thinking of others as fans help him celebrate.

Ringo Starr is cherished by lifetime friends and lifetime fans around the world. It’s not surprising that when the lineup for a virtual concert in honor of this milestone birthday was announced in the Atlantia Journal-Constitution a few days ago, on June 30, the roster of featured performers included country music giants alongside his blues and rock ‘n roll buddies.

A loving little resemblance and Ringo Starr making a difference

This morning, July 7, on “Today,” Jenna Bush Hager and Hoda Kotb celebrated the spirit and ever-solid beat of Ringo Starr, who still looks 40.  Jenna offered a personal tribute that likely made the famous drummer feel even younger.  She shared a photo of her infant son, Hal, who turns 1 next month, sporting what she thought was a look-alike haircut to Starr’s 60s coiffe.   Hoda wasn’t exactly sold but she gushed over Hal growing up so fast.

Proceeds will benefit Black Lives Matter Global Network, MusiCares, The David Lynch Foundation (which supports children in learning the benefits of transcendental meditation), and WaterAid.  Fans will also get a first look at another exclusive treat.

Ray Wylie Hubbard, Steve Earle, Willie Nelson, T Bone Burnett, Rodney Crowell, Jackson Browne, Kenny  Loggins, Michael McDonald, Elvis Costello, Peter Frampton, and bluesman, Keb Mo all do their part in the music video for “Give More Love,” which will make its global premiere during the Ringo Starr celebration.  The video is dedicated and created to support MusiCares, which extends life-saving intervention to artists struggling with addiction and other life crises, and promotes music education in schools.

No one had to tell Buck Owens what a superb country singer Ringo Starr is.  The originator of “the Bakersfield sound” in country music considers the former Beatle a forever friend as well as a fine musician.

Buck Owens and the Buckaroos recorded the song, “Act Naturally” in 1963, taking it to number one, but in the summer of 1965, when the song was recorded by the Beatles as part of the “Help” soundtrack, the country song drew a worldwide following.  Ringo’s lovely vocals sit somewhere between Louisiana and Liverpool, and the song perfectly displays his ageless warmth.  “Act Naturally” was the B-side to “Yesterday” in its release as a single.  The song soon became a fixture in the Beatles’ live set, and of course, Ringo always relishes playing it live with the All-Star Band.

In 1989, Ringo Starr and Buck Owens recorded “Act Naturally” together for the first time, including a delightful romp in a music video.  Owens passed in 2006, but thanks to Ringo Starr, the classic song lives every night on stage, after the pandemic passes.

“What Goes On” and the White Album’s “Don’t Pass Me By” are just two more songs with country flair and feeling that uniquely shine in Ringo Starr through the Beatles reign.  Altogether, he assembled 11 unforgettable tracks through the almost seven years of recording.

In the early days at Germany’s Cavern Club, it was common for the Beatles to lean on their rockabilly favorites for songs through the brutally long sets that honed the band’s greatness.   Paul McCartney would break out the Elvis Presley rendition of “Blue Moon of Kentucky” to the delight of screaming fans.

Those days were before the arrival of Ringo Starr as the permanent drummer, who was actually the choice of producer, George Martin, due to his musicianship.   The rest is history that crossed every genre in music.

Paul McCartney opened his 1991 MTV “Unplugged” show with the authentic Bill Monroe version of “Blue Moon of Kentucky,” detailing how he listened to the bluegrass standard as a boy.  In 1974, Paul and Linda McCartney savored a long stay in Nashville with Wings.  One night, after visiting Printer’s  Alley, McCartney wrote the song “Sally G.”  The playful, oh-so singable tune charted on the Country and Hot 100 charts, where it climbed as high as #17.

No one can guess what songs will make the playlist for Ringo Starr on his big night tonight, but whatever the song and whoever the singer among the many friends and fellow musicians, every note will be filled with peace and love and wishes for many more years with Ringo in the world.  He and the All-Star Band are booked to resume their tour on June 22, 2021.

Kelly Clarkson Listens To Fans & Delivers — Here’s How
Jimmie Allen Puts The APB Out On ‘On My Way’ With Jennifer Lopez
Maren Morris’ Tour Bus Is Far From Humble
Keith Urban Relies On Marital Devotion For Sobriety?
Carrie Underwood Hearkens Back To Signature Style On New Tune