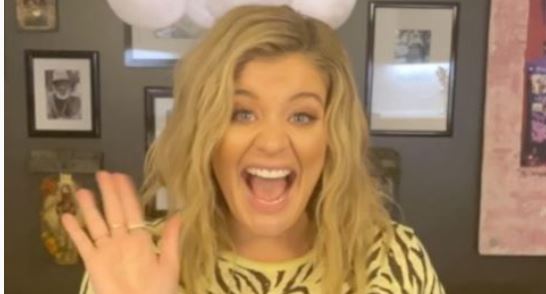 Country music sweetheart, Lauren Alaina, gives details on her new EP “Getting Over Him”

American Idol alum, Lauren Alaina spills the details on her latest EP according to WIN Country. Seemingly coming off the heels of the success of her duet with Jon Pardi for the song “Don’t Blame It On the Whiskey,” the duet partners are joining forces again for Lauren Alaina’s latest song.

I KANE even believe that two kids from a small town in Georgia are going to be a part “Best of #CMAfest” tonight at 8|7c on ABC. Be sure to check it out! 🎤

Lauren Alaina and Jon Pardi duet “Getting Over Him”

WIN Country calls Lauren Alaina “one of country music’s most in-demand duet partners.” This is due to the fact that she sings alongside other popular names in Country music such as Kane Brown, Dustin Lynch, and Chris Young.

Notably, the difference between “Getting Over Him” and the other duets the “Getting Good” singer has sung is, this is for her album- not someone else’s. “I’ve done duets with other people for their projects, but I have never done any for my own,” shares the songstress. She makes mention that she “can’t believe (she) has a rebound song.”  Along with that note, she says, “I feel like this music shows my personal growth and my emotional growth.” With that in mind, it’s hard to believe Lauren Alaina began her rise to fame on Season 10 of American Idol. At the time, she managed to secure runner-up at only 16 years old.

Luckily for fans, this isn’t the only duet on the project. The track titled “What Do You Think Of?” features Lukas Graham.  Music Row shares more details on this pairing. “Lukas Graham’s vocals on this is ridiculous,” praises Lauren Alaina. “I am the most nervous about releasing this one because I was so vulnerable when I wrote it.”

What we know about the EP

The six-song project is due out on September 4. The track-list is as follows.

While the EP may not be out until September 4, fans can listen to “Run” tomorrow (July 31st).  Lauren Alaina shares her thoughts on the EP. “It’s about me being able to get back to that same confident girl I wrote about on Road Less Travelled and to hold on to that confidence.” Additionally, she says, “I get to celebrate that with this music and I’m so excited. I can’t wait for the fans to hear it.”

I came a-CROSS a little GEM named Izzy who sent me this beautiful necklace to raise money for families dealing with pediatric cancer. I’m sure JEWEL be needing one too. Swipe over to see a beautiful picture of sweet Izzy. My limited edition necklace is designed by Izzy Martin, an amazing, and strong 10 year old girl who is mightily battling osteosarcoma, a type of bone cancer.  Izzy and @hazenandco designed a piece of jewelry that features a gold-filled chain, a freshwater pearl cross, and turquoise beads.  50% of every necklace sold will go to supporting the families of pediatric cancer patients who face many unforeseen expenses related to cancer.  @saloodinc, a Dallas non-profit, has masterfully orchestrated this collaboration.  Visit Hazenandco.com or click the link in my story to order your necklace today💕

Without a doubt, Lauren Alaina is a country singer to keep an ear out for. In the past 8 years, she’s been nominated for 25 awards. Remarkably, of her 25 nominations, she’s won 8 Country music awards. Keep it tuned to Country Music Alley for more Lauren Alaina and other Country music news.