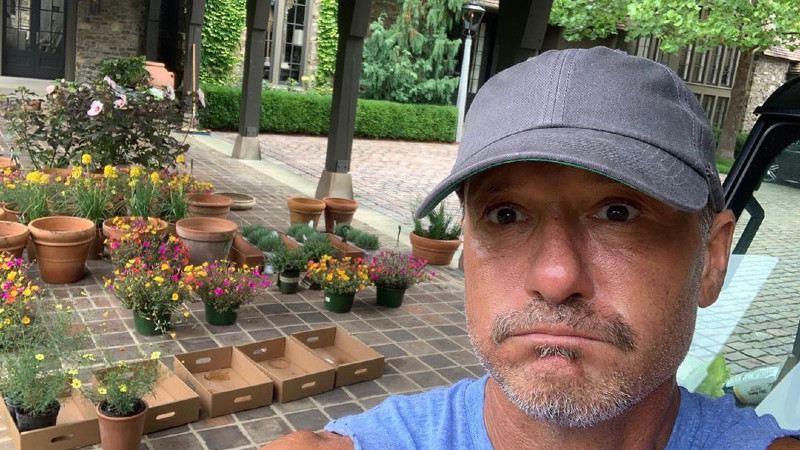 It’s no wonder that Tim McGraw has no trouble feeling right at home on the Today show.  The country superstar and his stellar vocalist wife of nearly 24 years, Faith Hill, have visited the morning show countless times over the years.  The two shared the Citi Concert Series stage back in 2017, just as they were about to embark on their third incarnation of their sellout Soul2Soul Tour.

Last year, Tim McGraw was as candid as ever, visiting with Today about how faith, redemption, and fitness all work together for the country music icon, father, and husband in his book, “Grit And Grace:  Train the Mind, Train the Body, Own Your Life.”

It’s hard to believe that it’s been five years since Tim McGraw released a whole new album of music, but it’s true.  McGraw created some fantastic virtual performances for fans to savor across miles in celebration of today’s release of “Here on Earth.”  He also talked about the pre-pandemic timing in creating the album. The songs took on “a whole new meaning” in light of the virus siege.

Life and love are about big things and the smallest memories, and Tim McGraw shared both views on his August 21 Today talk.

Loyal and longtime Tim McGraw fans know that the singer’s famous black hat only comes out for stage shows.  For his “Here on Earth” video for the title song, though, a montage of people of all colors, creeds, genders, and stages of life are seen under the brims of black hats.

“It’s like we open our eyes for the very first time/When we find out why/We’re here on Earth” affirms the chorus, as eyes of all hues slowly open.   For some, the “two pink lines” bring all the purpose needed in life.  For others, it’s the reality that years go by faster than finding the commitment to make the most of them.

No matter what the faces look like surrounding our daily lives, we all have a calling to do something and to be something better.  It seems as though the title song and the entire collection was purposed for pandemic life.  Tim McGraw declares that assumption would be wrong.  The songs were all recorded before the virus overtook countless lives across the globe, but “Here on Earth” certainly took on a necessary and timely purpose all its own.

“She’s one of the best singers in the world,” asserts Tim McGraw of Faith Hill.  “When I had to keep up with her onstage, I couldn’t help but get a little bit better [as a singer]. “  After recording their duets album, “The Rest of Our Lives,” and wrapping their Soul2Soul tour together, Tim knew he was at his vocal peak.  “I wanted to record while I was at that stage,” he admits.

Tim McGraw’s intent was to create a sonic “tapestry of life.” McGraw’s moviemaking skills also came forward.  “I wanted to create these cinematic vignettes throughout the record,” he describes.  Some views are from the 30,000 feet perspective and others capture intimate moments that are “the heart of a relationship.”   The artist agrees that the album is about “the bigness of life in a lot of ways” as well as the small moments that linger in the memory.

Tim McGraw hopes that every listener of his new album can put “yourself in every song.” He craves the artistic satisfaction of feeling that everyone can “be in the scene” created within the songs.  Faith Hill is definitely a fan of her husband’s latest collection.  She had the perfect way to celebrate its debut to the world.

The girls and I surprised Tim with our first ever family album release party. Yeah, I know…..Honestly, it is the truth. We have never listened to one of our new albums with just the girls. Ever. An unforgettable evening for what in my humble opinion is one of the greatest albums Tim has ever recorded. We listened to the double vinyl records blaring from the speakers!!!!!! A night we will never forget. Here is a small clip of our special evening celebrating the man we all adore in the Mcgraw house of women. We are so proud of this man!!!!!! He has created a masterpiece. More to come……. #DamnSureDo

Faith looked radiant in white with barefoot feet as she and the couple’s daughters, Audrey, Maggie, and Gracie surprised dad with a McGraw family release party for “Here on Earth.”  Tim decidedly approves of the natural look for Faith, as revealed in a Country Music Alley feature.  There wasn’t a dress code for the guest of honor.  Faith gushed in her Instagram post that the effort was “one of the greatest albums that Tim has ever recorded.”

Dancing under the glow of white strands of light, it’s clear that love is so alive for this family.  “We are so proud of this man!!!!!” Faith closes her comments. “He has created a masterpiece.”

“Here on Earth” has already had a stratospheric impact for the people Tim McGraw loves most.