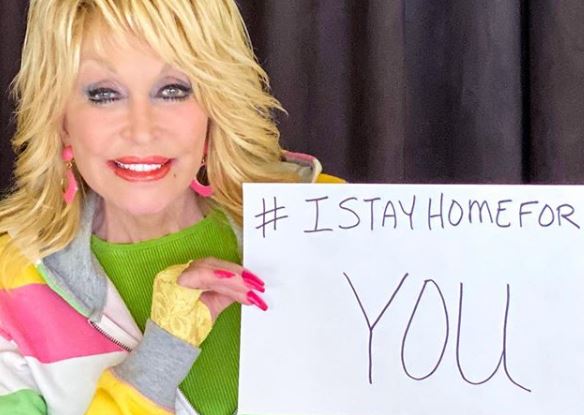 ,Dolly Parton is passionate and purpose-driven in all she does.  The country music queen doesn’t know the meaning of doing anything halfheartedly, especially at Christmas time.  It’s not even October yet and Dolly is doing her best to bring everyone a big dose of Christmas cheer.  Her first brand-new Christmas album in 30 years will be out on October 2, and Yahoo broke the news today (September 29) that Dolly Parton’s Christmas on the Square will sparkle small screens with delight in November on Netflix.

Christmas specials have become a specialty for Dolly Parton. Besides all of her holiday appearances as a headliner in multiple Christmas specials on TV from the 60s through recent years, Parton really moved millions of TV-viewing hearts with her own autobiographical story.  The 2015 TV adaptation of Dolly Parton’s Coat of Many Colors not only broke all ratings for a Christmas special for NBC in its initial airing but also continued its top ratings as a rerun during the holiday seasons since.  The deeply authentic portrayals of Robert Lee Parton and Avie Lee Parton by Rick Schroeder and Jennifer Nettles immediately captivated viewers, and Alyvia Alyn Lind seemed born to play the young Dolly.

The following year, Dolly Parton’s Christmas of Many Colors: Circle of Love debuted on NBC.  The story was a retelling of a memorable but difficult Christmas season for the Parton family and a rescue by divine providence from a winter storm.  This time, Dolly Parton joined the starring cast as The Painted Lady, who gives the young Dolly a generous offering for a song performance.  Of course, the lady of supposed ill repute has a heart of gold, just like the legend who portrays her.

Dolly Parton knows the power of music to lift the human spirit better than anyone.  The 74-year-old supercharged songwriter has 14 original songs to fill her movie musical.  Dolly Parton’s Christmas on the Square will surely start family sing-alongs to last until the last of the Christmas lights come down.  Fans can get copies of “A Holly Dolly Christmas on Friday.  Take a listen to the title song for “Christmas on the Square.’ from the album.

The story set to music in the new Netflix project has some of the most beloved and familiar names of the stage and screen ever. The spectacle is directed and choreographed by the famed Fame director and choreographer, Debbie Allen, who has three Emmys and a Golden Globe to her credit.  Broadway wonder and star of The Good Fight, Christine Baranski, takes the role of the leading lady in the production, alongside Treat Williams, another Golden Globe nominee, Jenifer Lewis, Jeanine Mason, and Josh Segarra.  Dolly Parton is the creative muse for the music, but she has an A-Team of stars telling the story.

Baranski takes the part of Regina Fuller.  Netflix describes the character as “a rich and nasty woman,” which should be a feast for the actress.  She returns to her small town after her father’s death, preparing to evict everyone and put them on the street, literally, right before Christmas.  Fuller has plans to sell the land where she started to a mall developer, a divine spirit in the form of an angel, played by Dolly Parton, intercedes. Of course, this intercession causes a change of heart.

Any new content on screens is a treat during the pandemic siege, and this dose of hope and music from Dolly Parton and company arrives with perfect timing. Dolly Parton’s Christmas on the Square releases November 22.

A friend in need, Mac Davis,  has prayers from Dolly Parton

No matter how busy Dolly Parton is with her multitude of commitments in music, movies, or her many charitable initiatives, such as her Imagination Library for young children, she always makes time for any friend in need.  Sometimes, spreading the word is the best way to get prayers surging to heaven. Right now, singer-songwriter Mac Davis, needs that power, as Billboard per MSN notes.

There was a time during the late 60s to early 70s when everything Mac Davis wrote turned golden.  The Lubbock, Texas native wrote hits for Bobby Goldsboro, “Watching Scotty Grow,” and Kenny Rogers & the First Edition with “Something’s Burning.” He earned an artist’s royal coronation when Elvis Presley recorded “In the Ghetto, “Memories,” and “Don’t Cry, Daddy.”

Davis’ 1972 hit, “Baby Don’t Get Hooked on Me,” played across every radio dial– country, pop, or rock station. The song and a few others that followed spun the affable artist into his own musical variety show from 1974-1976, and Dolly Parton surely remembers.  In 1974, Mac Davis was the ACM Entertainer of the Year. He was inducted Into the Songwriters Hall of Fame in 2006.

The Davis family sent out a plea on social media, writing that Mac Davis was “critically ill” following heart surgery in Nashville.  “Your love and prayers are appreciated,” the words assured, along with the hashtag #PrayForMacDavis.  On Monday, Dolly Parton posted the hashtag and heartfelt message to her fans.  The country music family rallies in faith like no other, and hopefully, the Davis family feels the strength of unified faith.  Sometimes, an angel in the movies can be one on earth, too.