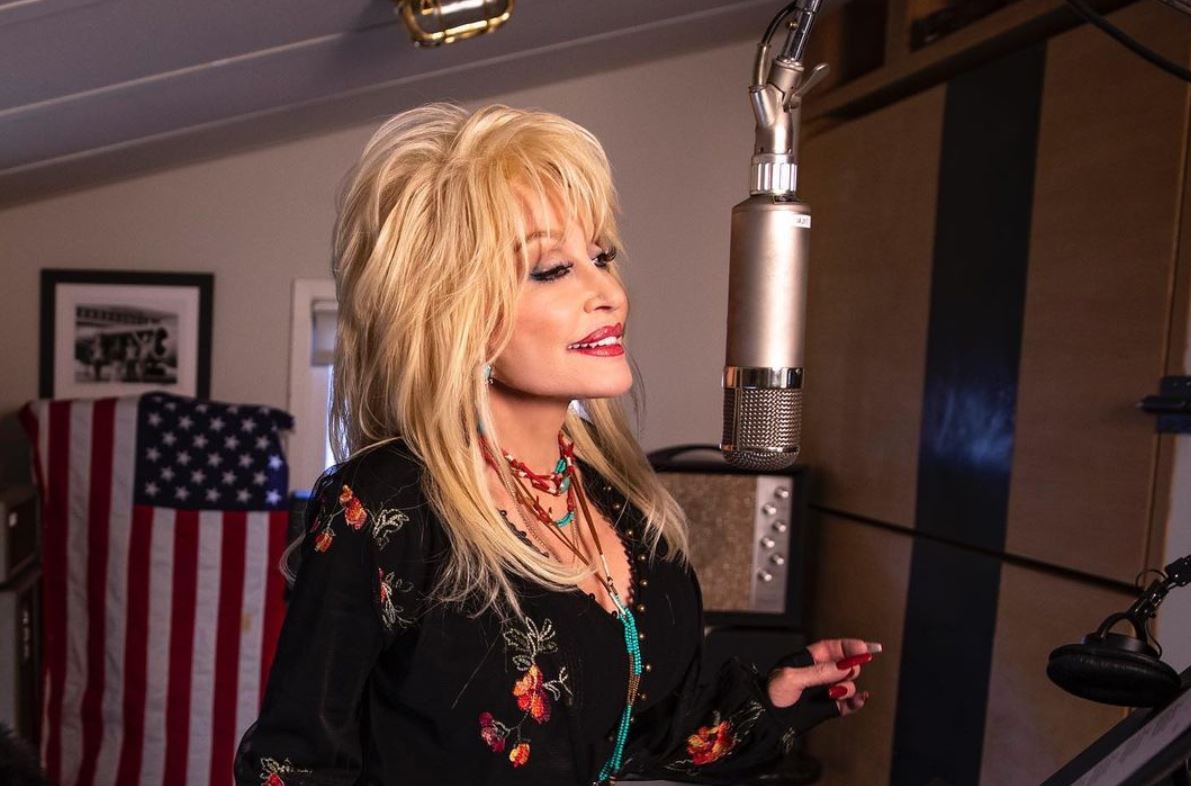 The countless friends, fans, and family members who consider Dolly Parton to be an angel on earth aren’t far off in their estimation.  The country music legend led with love and generosity like no one else in the celebrity sphere through the pandemic.  Her gifts to Vanderbilt University Medical Center near the start of the outbreak were intended to save lives until vaccines were developed.  Ultimately, donor records revealed that Dolly Parton was one of the catalysts for the development of the Moderna vaccine through her funding.  Hundreds of thousands of lives worldwide will be spared through the decision by Dolly Parton to do something now, while “we got more money than we got time,” as she perfectly puts it.  She may never know their names, but across the globe, her name will be remembered.

Dolly Parton does know the name of the one special young person she spared on the set of her Netflix TV musical, Christmas on the Square. Nine-year-old Talia Hill is alive, well, and ready to tell the story, as Today per MSN confirms.

It’s only doing what angels do, says Dolly Parton

Talia Hill recently recalled her story for Inside Edition, the syndicated news broadcast.  It was news to the dancer to discover the danger she was in after a stop at the hot chocolate station on the set.  (What’s not to love about all-day hot chocolate?!).  The call came to all the performers to return to “you’re beginning positions,” as Talia remembered, but apparently, she didn’t remember to look both ways.  Dolly Parton was on duty as the ever-alert traffic cop.

“There was a vehicle moving and I was walking,” the young performer describes “before somebody grabbed me and pulled me back.”  “I looked up and it was Dolly Parton,” the dancer saw in disbelief.

“Well, I am an angel, you know,” Dolly Parton declared in Talia’s recollection, adding that the reminder was “cause she plays an angel in the movie.”  After a hug, the country music queen couldn’t let her young friend on December forget the seriousness of the situation. “I saved your life,” the stellar songwriter spoke.  This whole adventure could very well become a Dolly Parton song.  Talia only relates to being in shock from the experience.

The incident and divine intercession was anything but playacting and pretend to Talia’s mom, who confirmed by her tears of relief that Dolly Parton saved her daughter’s life.  “Yes you did, Dolly Parton, yes you did,” the mother affirmed.

Through the decades, Dolly Parton frequently offers loving praise to both her parents.  She particularly credits her mother for the spiritual intuition she imparted into Dolly Rebecca as a child.  During her A Holly Dolly Christmas CBS television special on December 6, Parton reflected on her mother’s creativity and constant positivity despite raising a family of 12 in the Tennessee hills with very little means.  “She could say anything and make it sound good, cook anything and make it taste good,” and of course, “sew anything and make it look good” Dolly Parton concluded.

The superstar also told the story of how her mother got no presents at the church Christmas party her children all received gifts.  Dolly offered hers to Avie Lee Parton, in tears. Naturally, the selfless parent declined. Dolly explained how the memory always reminds her how her mother was only 15, a girl herself when she became a mother. The rendition of “Coat of Many Colors” was piercingly poignant after such personal disclosure.

In 2017, Dolly Parton shared another healing story about her mother.  She described how the resourceful role model reattached three of her daughter’s toes on her right foot.  Dolly was only 6 or 7 when she climbed over a fence and landed on broken glass from Mason jars.  The daughter still marvels that the same needles her mother used to make “quilts and stuff” were used to make her foot complete again.  Cornmeal absorbed the blood and kerosene was the antiseptic.  The loving surgeon-mom path stitched her best.  Dolly verified that “they healed and I’m still walking on them today.”

Huge dollars may be part of Dolly Parton’s retirement strategy

Avie Lee wrote down her daughter’s first song, “Little Tiny Tasseltop” before Dolly Parton had learned to write.  Reports from The Guardian via MSN today, December 10, indicated that the Grammy-winning, Guinness World Record entertainment honoree may be following in the footsteps of Fleetwood Mac’s Stevie Nicks and Bob Dylan by looking to sell her massive back catalog of songs.  By her own calculations, as many as 4000 songs are part of the Dolly Parton legacy, so the dollars would be huge.

“It’s very possible that, for business reasons, estate planning, and family things, I might sell the catalogue (British spelling) I have now,” Parton tells Music Week.  “I’ve often thought about it and I’m sure I could get a lot of money for it.”

Dolly has done enough good through her almost 75 years of artistry and philanthropy to measure whatever goals she has for her later senior years, but her songs are eternally timeless.  She would maintain “some control” no matter who Dolly Parton agrees to as a buyer.  She also would keep my credit for the songs.”  As a songwriter, Parton is no different than any great in country music or any other genre.  “I wanted my name on my songs.” That will never change.

Dolly Parton is known to drive a hard bargain in business negotiations.  Especially now, the superstar likely has supernatural support from above on her side.  She is an angel, after all.  Any bottom line better be a good one.