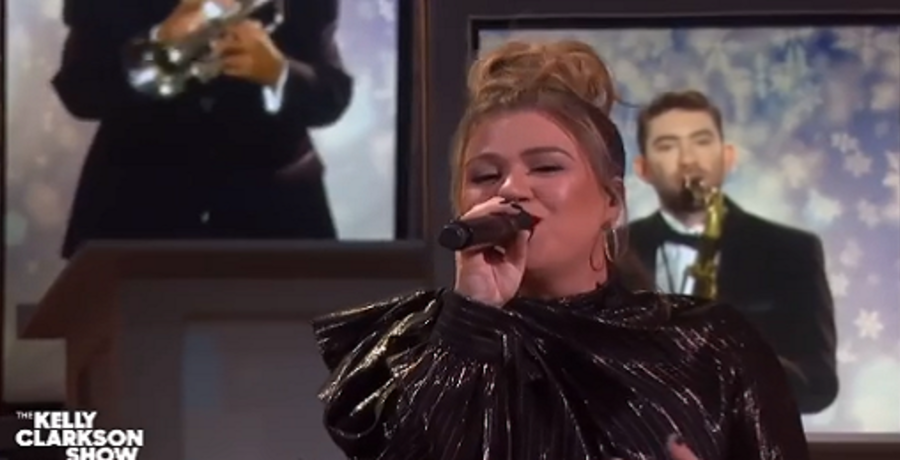 For the new year, Kelly Clarkson has been covering a lot of hot songs. On Friday, January 8, the daytime host covered “Rainbow” by Kacey Musgraves on her talk show. She performed the song during the Kellyoke segment on her daytime show. The 38-year-old host sat near her musical director Jason Halbert as she crooned Kacey’s hit song.

Check out her incredible covers

The “Since U Been Gone” singer crooned along to Kacey Musgraves’ “Rainbow.” The track is featured on the singer’s third studio album, Golden Hour. “Rainbow” won Song of the Year and Music Video of the Year at the 53rd Annual Country Music Association Awards. According to Kacey, the song is “a message of hope for anyone in the midst of dark times.”

This was the perfect song for Kelly to cover during the Friday episode of The Kelly Clarkson Show. This comes just a day before the American Idol champ put her twist on Drake’s 2013 track “Hold On, We’re Going Home.” The singer got some help from her band, Y’all, who stood behind her as she took the stage in a long black dress. She started the song similar to the original track before adding her signature twist.

Kelly was able to take the laid-back track and turn it into an upbeat R&B sound. Fans are hoping to get more R&B songs from her in the future. Kelly last played around with different genres on her 2017 album, Meaning of Life. Earlier this week, the mom of two even covered Selena Gomez’s single “Rare.”

The “Breakaway” singer put an empowering twist on the post-breakup song. On Wednesday, Kelly Clarkson belted the title track as she wore a dark purple gown. It was a soulful, yet upbeat rendition of the singer’s 2020 album. Even Selena Gomez herself loved it.

She took to Twitter to repost Kelly’s performance. She also shared her appreciation for the songstress and the performance.

“Love this and ♥️ you @kellyclarkson!” she tweeted.

Fans loved seeing their two favorite singers support one another.

“QUEEN SUPPORTING ANOTHER QUEEN WE LOVE IT,” one fan tweeted.

“Such a great cover! Loved it! ♥ Your support towards Selena is beyond words,” another fan added. “Thank you for making the world so nice.”

Love this and ♥️ you @kellyclarkson! https://t.co/3ipPUebFqI

However, this isn’t the first time that Kelly has covered a Selena Gomez song. In November 2020, she performed “Come and Get It” from the singer’s Stars Dance album. But Kelly’s latest cover is very fitting for her personal life. She was awarded primary custody of her children with estranged husband Brandon Blackstock.

The couple shares two children, River Rose, 6, and Remington Alexander, 4. Kelly and Brandon are in the midst of a difficult divorce. She even filed a lawsuit against him, claiming that he acted fraudulently as her manager. Check back with Country Music Alley for the latest news on Kelly Clarkson.

What do you think of Kelly’s covers? Sound off below in the comments.

Kelly Clarkson Listens To Fans & Delivers — Here’s How
Maren Morris’ Tour Bus Is Far From Humble
Miranda Lambert Voted One Of Most Influential People 2022
Blake Shelton Headlines 2 Major Events, See What
Jimmie Allen Puts The APB Out On ‘On My Way’ With Jennifer Lopez