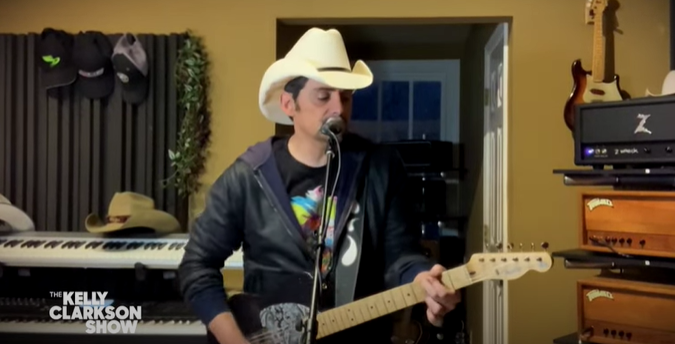 Brad Paisley released his latest single on Wednesday, and it is a different direction for the country music superstar. The Little Moments singer is well known for his quirky, fun, and emotional songs, but this song is more progressive. Off Road is an ode to a countrywoman making her own way in the world. It has all the best aspects of a classic Paisley hit: smooth music, catchy lyrics but with an appreciation for strong women.

It includes the lyrics: “It is literally, you can’t stop a country girl. You can put up a roadblock and she will just go around it.”

Brad appeared on The Kelly Clarkson Show on February 10. And they talked about the NBC special 95th Anniversary of the Grand Ole Opry, which he is hosting. Then later during the episode, he performed Off Road for the first time live, and he will perform it again on February 14th during the Opry special.

But before he performed, Brad told Kelly that he felt like the song was really about her. “And I’ve said to your producers and to everybody. Ever since I got this done, this is you, Kelly. This is totally you.” He even went on to stress, “And it’s about a girl too in Hollywood, so that is exactly you [Kelly].”

Kelly agreed that she did feel like the song was talking about her, but that she believes a lot of women will feel the same way. “I was listening to it and I have honestly never related more to a message. I know a lot of women are going to feel this and blast it with the windows down.”

The lyrics of the song are very about women knowing what they are capable of and creating their own path when something gets in their way.

Some of the lyrics include the following:

“She didn’t move out here to fail / She’s gonna blaze a brand new trail / Where anybody else might stop / When they run out of blacktop.

You see that mountain over there / You see those tracks on the beach / Yeah, she can go anywhere / Ain’t nothin’ outta reach / She’s a little off road.”

Will there be new music?

Brad Paisley jokingly called music a “superpower” because he credits his music with helping him charm his wife. But he is not really wrong. Music has the ability to bring people together and touch the heart and soul in just a few short minutes. The right song can turn the day completely around people and musicians as blessed to have that ability.

Off Road is the first song Brad Paisley has released since No I in Beer in July of 2020. That song was to help people cope with the stress of the pandemic. The music video was also full of light-hearted fun. Brad crashed zoom calls and sang to fans as they shared some beers. And it may shock some fans but the last full album Paisley released was in 2017. There is no news about a new album as of yet, but fans are hopeful