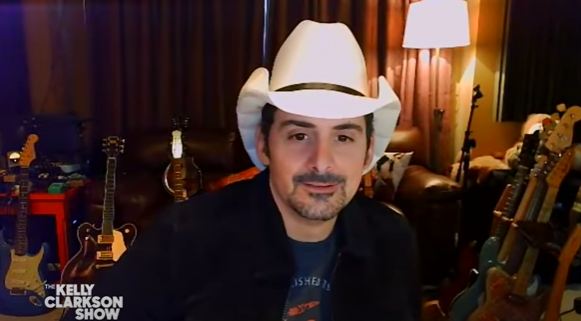 Unlike many people this week Kelly Clarkson is using her show to celebrate Singles Awareness Week. So, it was a little funny that she had guest Brad Paisley, who will be celebrating his 18th wedding anniversary in March, on this week. But Brady agrees with Kelly that this holiday needs to be opened up to singles. The singer-songwriter even wrote a verse on the fly to commiserate with the lonely hearts out there.

“We need this. I’m sick of this being just for people that are in love,” Paisley quipped. “Valentine’s Day is a letdown.”

But in all seriousness, Brad Paisley was on the show to talk about the upcoming NBC special celebrating the 95th anniversary of The Grand Ole Opry. The two-hour special will air on Feb. 14 at 9 p.m. ET. So, Brad encouraged everyone and the singles to tune into the show. He will be co-hosting the show with fellow Grand Ole Opry member and The Voice coach Blake Shelton.

Kelly joked that she could not imagine the disappointment that Brad felt when he heard who they chose as his co-host. And Brad ran with the joke but ultimately admitted that he and Blake have been friends for so long that co-hosting was really fun. “They let us play,” Brad explained, “I raz him and he razes me and it’s great.”

Brad gushed that he was thrilled to get the chance to host the show because of what the Opry means to country music. He says, “NBC is doing a great thing by doing a real amazing special that we couldn’t have done typically. The fact that we were able to pull this off and get all these performances […]. It is just a great feel-good retrospective about country, both its past and its future.”

Country music’s home took a couple of really hard hits last year. Nashville suffered severe damage during a massive tornado outbreak in early March. Which was then followed in quick succession by COVID-19 shutdowns. And to round off their year there was a car bombing on Christmas Day in downtown Nashville.

But even before the hits started coming in Brad and his wife Kimberly wanted to do something to help the people of Nashville. So, they took inspiration from a Santa Barbra charity they visited called Unity Shop and created The Store.

The Store is a grocery store where people who have lost their jobs can get groceries for free. The store does not have a limitation on what a family can get. And people can choose what to feed their family. The people graduate out of the program once they find a new job and get back on their feet. But it is meant to preserve the parents’ dignity and provide normalcy during difficult times.

Little did Brad Paisley know how vital this venture would turn out to be during 2020. They opened their doors after the tornado outbreak and expected to provide 300,000 meals over the course of the year. But as of the beginning of February, The Store has provided Nashville families over a million meals.

Morgan Hiler
Morgan likes to keep a lot of “irons in the fire”; if she isn’t working full time then she is juggling several projects. Keeping herself busy seems to be working for her though. She loves to watch TV dramas, pretty standard stuff, but she also loves curling up with a good book, a hot tea, fuzzy socks and all.