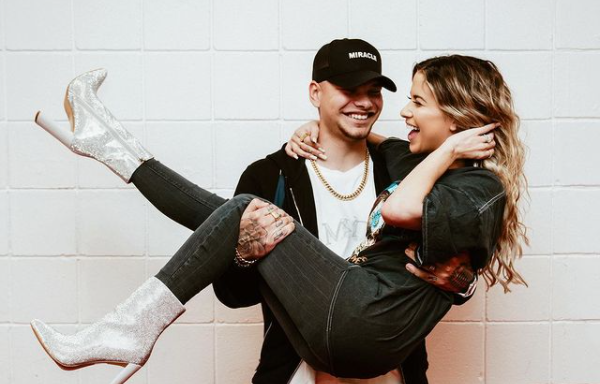 Kane Brown has been dropping a ridiculous amount of hints and details about his new album, but there are still more coming. During his Twitch live stream on Feb. 26th Kane told fans he was headed to the studio. He said he needed to get “two more songs done today,” but that he was also in the studio on the 25th. Brown bragged a little bit that he had been in the studio for six hours. He finished two songs and one of those he called “his favorite song” ever. Brown further confirmed that his wife Katelyn Jae will be recording a duet with him for the album.

The duet the couple finally decided to collaborate on is called “Mad at the World” and Brown said that it was “perfect” for them. The message of a song according to Brown is “how could I be mad at this world when this world gave me you?”

“Yeah, the duet will be on the new album, I’m excited about that,” Brown confessed.

Katelyn first met Kane Brown at one of his shows in Florida. “She came to one of my shows, and the first time I saw her, it was the shy giddiness,” Brown said.  Although the pair didn’t really interact the first time they met Brown did not let that stop him. He looked Katelyn up once he got back to Nashville and messaged her over Instagram. “I didn’t know what was going to happen. She lived in Orlando [and] was in Miami.”

The “What Ifs” singer took a risk and asked her to hang out on Instagram. Then Kane flew her to Nashville for dinner and the rest is history. Kane told Cody Alan in an interview that he knew Katelyn was “the one” very early in the relationship. The couple is so similar at times that Brown has called her his “mini-me” occasionally. Brown was so eager to ask Katelyn to marry him that he abandoned his original plan of roses and proposed while the couple was watching The Amityville Horror.

But Katelyn also has a background in music. She graduated from Berklee College of Music in 2019.

Kane Brown and the ACMs

The ACM Awards’ nominees were announced on February 26, and Kane has nods in two categories. The first is Album of the Year for his 2020 EP Mixtape Vol. 1. His second nomination is for Video of the Year for “Worldwide Beautiful.”

The Academy of Country Music Awards show will air on CBS Sunday, April 18, at 7 p.m. CT.