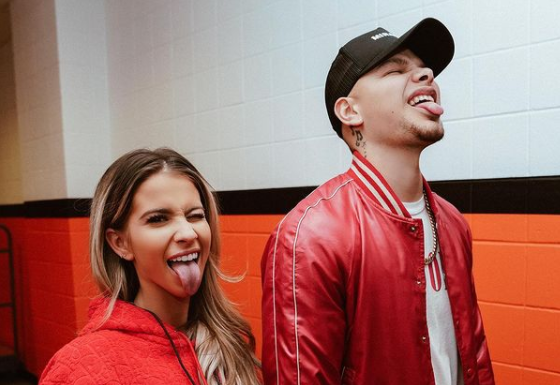 Looks like Kane Brown is joining the ranks of other country couples like Luke and Caroline Bryan and Jason and Brittany Aldean as pranksters. Kane recently posted a new video where he pranks his wife Katelyn while they are getting Starbucks. In the cute video, Brown asked Katelyn a trick question to see if she would figure out the joke.

Katelyn quickly caught on to Brown’s plan to embarrass her but she still had a hard time answering the question. Katelyn was handing everyone on Brown’s team their orders when Brown asked, “How old would you be if you were born 12 years ago? Let’s see your math skills.”

Katelyn repeated the question then tried to do some quick math. “Well, ten years ago I would be eighteen.” But Brown blew the joke by laughing. This tipped Katelyn to scheme. “Oh, how old was I twelve years ago or I was born 12 years ago? OH! So, I would’ve been born in 19. I’m not going to fall for one of your stupid trick videos.”

Brown has been giving his fans some quality comedic moments on social media. This is not the first brain teaser he pulled on Katelyn. In the first video that Kane posted, he asked Katelyn what does y-e-s spell. She quickly answered “yes” and then Kane asked, “What does e-y-e-s spell?” This time Katelyn struggled a little bit and didn’t figure out what he was asking. Brown had finally told her the joke. When Katelyn realized what the answer was, she super embarrassed. She warned Kane, “Don’t post that anywhere!” But he didn’t listen.

Kane and Katelyn have also pretended to be each other on Instagram videos. Those videos show Brown riding his Peloton bike imitating Katelyn while Katelyn is playing Kane and getting ticked at a computer game. The couple is cute as they pick on each other, but fans are anxious to see what will happen if they get serious. Katelyn has taken the brunt of the abuse thus far, but Kane Brown better watch out if she decides to get serious.

Kane has been busy the last few weeks. He launched his new record label 1021, his birthday for those of you that don’t know, and signed his first group, Restless Road. Restless Road is the three-man group of Zach Beeken, Garret Nichols, and Colton Pack.

Kane also had his Grand Ole Opry debut during the Grand Ole Opry: 95 Years of Music TV special. Kane sang “For My Daughter” which he wrote after he found out that Katelyn was pregnant. Brown gave several interviews and explained that he wanted his first appearance at the Opry to be special for his daughter. Brown will also be releasing a new album later this year with 12-15 new songs. But there is no information as to when that project will be released.