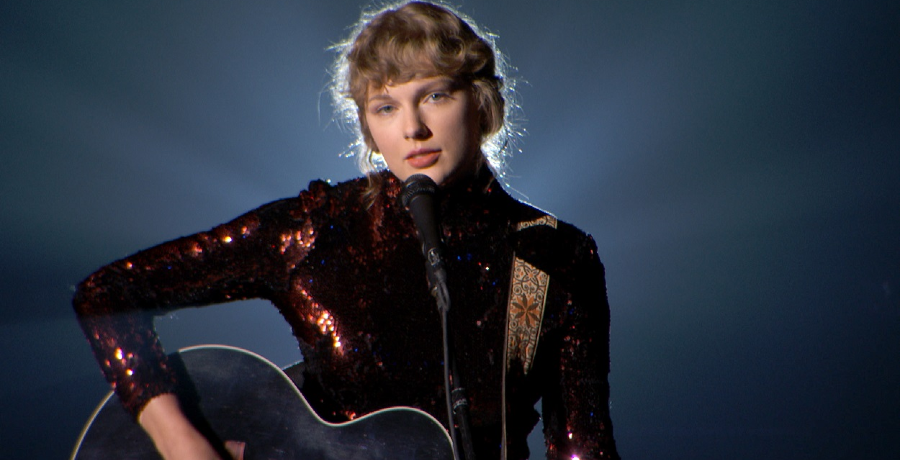 Taylor Swift gave a shoutout to her boyfriend Joe Alwyn at the 2021 Grammys. The singer-songwriter won Album of the Year for her surprise quarantine album, folklore. The 31-year-old accepted the award alongside her collaborators Aaron Dessner and Jack Antonoff. While her British boyfriend wasn’t there, he wasn’t forgotten.

On Sunday, March 14, the Grammy Awards took place in Los Angeles. Everything went without a hitch, even in a pandemic world. The “Willow” singer wore a floral Oscar de la Renta mini dress to accept her award. In her speech, Swift thanked everyone who worked with her on the album, including her longtime boyfriend.

Taylor Swift and Joe Alwyn have been dating since 2017. The couple has kept their relationship a secret, for the most part. Swift previously confirmed that Alwyn co-wrote two tracks: “Betty” and “Exile.” In the Disney+ film, Folklore: The Long Pond Studio Sessions, she revealed the identity of William Bowery, who had fans confused. In her 2021 Grammys speech, she remarked that she enjoyed writing songs with her boyfriend in secret.

“I want to thank all of my collaborators who are on stage,” Swift said, according to Us Weekly. “Joe, who is the person I play every single song I write. … Thank you so much, the Recording Academy, we will never forget that you did this for us.”

Fans noticed it’s a contrast to Swift’s 2016 Grammys speech. At the time, she won Album of the Year for her pop album, 1989. While she was dating Calvin Harris at the time, she didn’t acknowledge him in her speech. Instead, Swift addressed people who try to “take credit” for your “fame.”

“As the first woman to win album of the year at the Grammys twice, I want to say all the young women out there: There are going to be people along the way who will try to undercut your success or take credit for your accomplishments or your fame.”

The couple collaborated on their one and only song “This Is What You Came For.” The EDM song was made during the weekend of the 2016 Coachella music festival. But Swift kept her identity a secret and gave herself the pseudonym Nils Sjoberg. She wrote the song for Rihanna, who brought the song to life.

Taylor Swift went stag at the event. She decided not to pose on the red carpet with her boyfriend once again. Due to the strict COVID-19 restrictions that the Grammy producers placed, it’s understandable why everyone wasn’t in attendance. Even the attendees had to sit outside with face masks.

Swift and Alwyn have never done a red carpet together, even when they attended the 2020 Golden Globes. And while the “Cardigan” singer writes songs about their relationship, she refuses to talk about Alwyn in interviews. And the Favourite star respects their relationship. He refuses to say a peep about her as well.

So, don’t expect these two to make a red-carpet debut, even if they’ve been dating for four years. Regardless, it’s nice to see Swift happy and making music with someone she loves.

Blake Shelton Headlines 2 Major Events, See What
Jimmie Allen Puts The APB Out On ‘On My Way’ With Jennifer Lopez
Kelly Clarkson Listens To Fans & Delivers — Here’s How
Keith Urban Relies On Marital Devotion For Sobriety?
Carrie Underwood Hearkens Back To Signature Style On New Tune