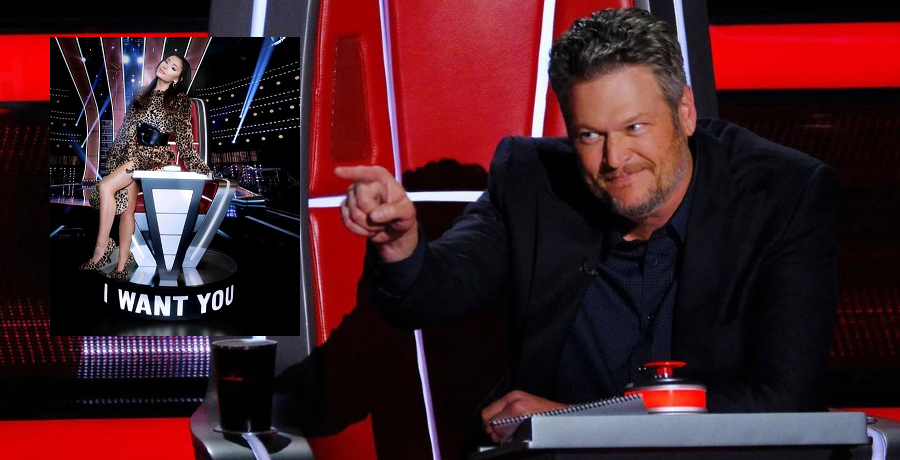 Blake Shelton shared his thoughts on Ariana Grande joining The Voice. While her season hasn’t even started yet, he has a feeling that she will lose. On Tuesday, March 30, the “Positions” singer shocked fans when she announced that she’s joining the upcoming season of the NBC singing competition. Some young fans feel that shows like American Idol and The Voice are where artists’ careers die.

However, that’s not the case for Blake Shelton, John Legend, Kelly Clarkson, and Nick Jonas. Both Blake and Nick have released new music. As for John, his career is still on a high. Country Music Alley previously reported Kelly’s net worth thanks to her time on The Voice and her talk show, The Kelly Clarkson Show. All of the coaches are doing well for themselves.

Now, find out Blake’s reaction to Ariana joining the panel.

On Tuesday, Ariana Grande announced she’s the fourth coach to join the 21st Season of The Voice. She will replace Nick Jonas, who’s currently on Season 20. Blake Shelton shared his thoughts on the singer joining the show. The “Minimum Wage” singer was in shock, as he just heard about the news.

He made an appearance on the Today Show with Hoda & Jenna on Wednesday to share his reaction, according to ET Online.

“About two days ago, the producers texted us and said it was going to be Ariana,” Blake said. “I’m excited about it. I’m a fan of hers. I’m not going to lie, we’re still going to beat the crap out of her, you know, on the show. It’s our job – they pay us to win, Hoda. They don’t pay me to lose.”

He’s the only coach on The Voice to coach all 20 seasons. Blake joked that he “used to look like Ariana” in its first season. Now, he’s looking forward to another win during Season 20, which is in the midst of its Battle and Knockout Rounds. He admitted that this time is his “least favorite” of the competition.

Ariana Grande shares her reaction to joining ‘The Voice’

During the interview, Blake Shelton said his favorite part of The Voice is the Blind Auditions. He loves to hear the contestants sing for the first time. He’s also excited for Ariana to experience that moment as well, but only because it’s a cutthroat time for the coaches. They compete with each other as they try to build their teams.

“It’s so much fun that we get to hear all the singers and that’s when we really get to go for the throat, as far as the coaches competing against each other,” Blake continued. “That’s where I can’t wait to get a hold of Ariana.”

She also shared her thoughts on joining The Voice’s upcoming season. On Tuesday, she released a statement, saying: “I’m so honored and excited to join The Voice family! I have been a huge fan of the show for such a long time. I can’t wait to go head-to-head with the incredible coaches, get to know these new artists, and help to take their craft to the next level.”

It’ll be interesting to see how Ariana interacts with Blake and the rest of the coaches. The Voice airs Mondays at 8 p.m. ET on NBC.