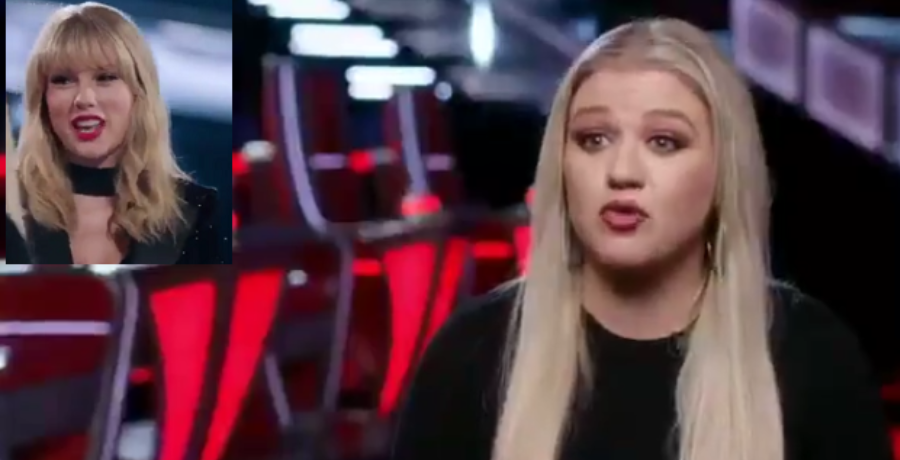 Kelly Clarkson encouraged Taylor Swift to re-record her albums. Now, fans are losing it over that old tweet. On Friday, April 9, Swift released Fearless (Taylor’s Version) and it’s set to crush records. For this album, the singer wanted to stay true nostalgia and love story of the 2008 album.

Fearless (Taylor’s Version) is just one of the six albums that Swift is re-recording. Clarkson understands Swift’s musical dilemmas. She’s been in a struggle with former producer, Dr. Luke, and her estranged husband, Brandon Blackstock, who was also her manager. So, it’s no wonder why she previously supported the fellow country artist.

Taylor Swift fans discovered a tweet that Kelly Clarkson posted in 2019, in which she suggested that the singer should re-record her old music. This came after Swift went public against her ongoing battle with Scooter Braun over the ownership of her masters.

“@taylorswift13 just a thought, U should go in & re-record all the songs that U don’t own the masters on exactly how U did them but put brand new art & some kind of incentive so fans will no longer buy the old versions,” Clarkson tweeted at the time. “I’d buy all of the new versions just to prove a point.”

@taylorswift13 just a thought, U should go in & re-record all the songs that U don’t own the masters on exactly how U did them but put brand new art & some kind of incentive so fans will no longer buy the old versions. I’d buy all of the new versions just to prove a point 💁🏼‍♀️

These days, tweets don’t age “well” in pop culture, but that’s not the case for Clarkson. Not only did she recommend that Swift re-record her own music, but she also suggested that she should create “brand new art and some kind of incentive” – which is exactly what the singer did. Fearless (Taylor’s Version) has a cover that’s different from the original and contains six never-before-heard tracks.

Swifties enjoyed uncovering Clarkson’s old tweet. One wrote: “this tweet has aged so well now that the re-recording is out!!!” A second one added: “So it started here. Kelly Clarkson gave her the idea.” Fans agreed that this advice paid off well, especially for the album which is set to debut at No. 1.

How Kelly Clarkson got the idea

At the time, Kelly Clarkson revealed that she got the advice from her former mother-in-law, Reba McEntire. The country superstar knows what she’s talking about it since she’s been in the game for years. McEntire has also re-rerecorded her own music and released remastered versions over the years. Re-recording one’s music is not unheard of in the country music industry.

“She re-cut all of her music and did the same musicians, same everything,” Clarkson told Jimmy Fallon in 2019. “That’s where I got the idea. She’s been writing since she was a little girl, right? So it’s kind of her diary.”

Swift did not publicly respond to Clarkson at the time. However, it looks like she took her advice into consideration. Fans are waiting to see which of her old albums she will re-release next. In the meantime, Fearless (Taylor’s Version) is out now.