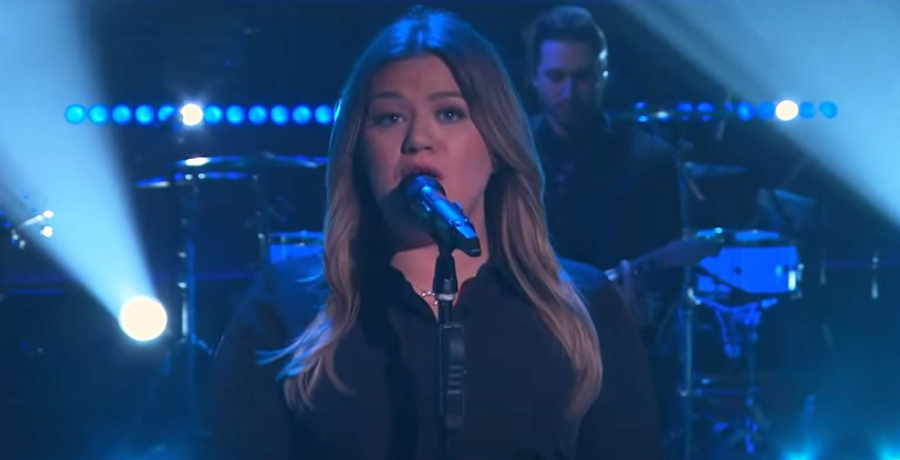 Kelly Clarkson took a big risk with this Frank Sinatra classic. On the Tuesday, April 20 broadcast of her daytime talk show, she performed “My Way.” On The Kelly Clarkson Show, she has covered everything from rock to pop to country and everything in between. You can classify this latest “Kellyoke” performance in the in-between category.

Over the weekend, Country Music Alley gave readers an inside look at how these covers come to light. Some of them are complicated and are left on the cutting room floor, while others are made possible with a lot of blood, sweat, and tears. Most of the covers are fan-requested and are approved by Clarkson herself.

At the top of the show, Kelly Clarkson and her musical director Jason Halbert performed a piano rendition of “My Way.” The two last got together for a classic Sinead O’Connor song, so this came as a surprise twist for fans. The lights dimmed as Clarkson stepped behind the microphone and gave it all that she got. She wore an olive green dress with black tights and matching ankle boots.

Meanwhile, Halbert sat behind the piano in an all-black suit. The two gave their rendition of the classic 1969 song. “My Way” was originally set to the music of the French song “Comme d’habitude,” which was written by French songwriters Claude Francois and Jacques Revaux. Paul Anka wrote the English lyrics to the track and aren’t related to the French song.

“My Way” ended up being a hit for many performers, not just Sinatra. Elvis Presley, Jocelyne, and Sid Vicious all performed their renditions of the song. However, Sinatra’s version spent 75 weeks in the UDK Top 40, which is second-placed of all time. “My Way” ended up becoming Sinatra’s signature sound. Over time, however, the singer ended up hating the song.

Fans love this rendition of “My Way”

Kelly Clarkson intended on doing her things her way with this cover. She gave a slow-down performance of the hugely popular song. As soon as The Kelly Clarkson Show posted the video on YouTube, it amassed over 2,100 views on early Tuesday morning. Fans love watching her performances, and they were curious to see how this one turned out.

Fans were pleasantly surprised to hear this version on Tuesday morning. Some were emotional, while others begged for more classic covers from her. Clarkson has covered countless songs on her daytime show, including Dido’s “White Flag,” The Chicks’ “Gaslighter,” and LeAnn Rimes’ “Blue.” However, she sounds just as good singing a classic.

Keith Urban Relies On Marital Devotion For Sobriety?
Kelly Clarkson Listens To Fans & Delivers — Here’s How
Miranda Lambert Voted One Of Most Influential People 2022
Carrie Underwood Hearkens Back To Signature Style On New Tune
Jimmie Allen Puts The APB Out On ‘On My Way’ With Jennifer Lopez