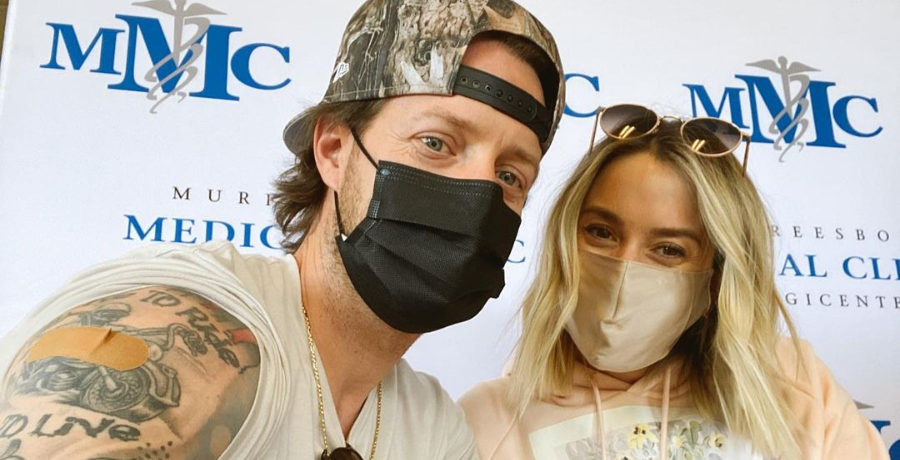 Taylor Hubbard’s wife Hayley Hubbard revealed how they got through the challenges of 2020. Like most people, the couple quarantined amid the coronavirus pandemic. Her husband was no longer on tour or on stage performing. Hayley and Taylor were going through some difficult times.

In most parts of the world, the coronavirus pandemic is not over. Some people are still trying to navigate this new world. Hopefully, people will do their part to get the vaccine so that masks and social distancing can become a part of the past. For now, however, people are still dealing with the ongoing pandemic.

In a new interview, Hayley revealed how she and her husband pulled through.

The couple laughed a lot through their difficult year

In a new interview on the Being Bumo podcast, Hayley Hubbard admitted they were in shock when she found out she was pregnant with their third child, Atlast Roy, in January 2020. This came five months after she gave birth to her son Lucca.

“We were at the point where we thought we would wait to have our third and just have a little time for us and getting used to having two kids, because…it was an adjustment for us,” Hayley explained. “I was excited to get my life back and my body back…When you give birth and you’re a new mom, there’s this new normal you have to get used to and it’s like, ‘How do I find myself again?’ So I was really looking forward to that and it was just like a bomb was dropped. So that was a lot emotionally.”

That’s not all that happened. Tyler was in a dirt bike accident just three weeks before his wife gave birth in September. He ended up with a broken ankle and a torn Achilles tendon. In November, Tyler tested positive for COVID-19 and had to quarantine on his tour bus in front of their home.

Despite their difficulties, the couple found humor in these situations. Hayley admitted that their trials were similar to a domino effect. That’s when the couple learned to laugh through everything that was going on. She admits that “laughter” is what helped them through that.

Why Hayley Hubbard had her breast implants removed

The mom of three explained why she had her breast implants removed. Per People Magazine, Hayley Hubbard shared her reasoning for reversing the procedure. The 33-year-old was initially concerned about breast implant illnesses (BII), which is also known as a syndrome that causes symptoms such as breathing problems, chronic fatigue, depression, and hair loss.

“I got mine removed because I had a textured gummy bear silicone implant, which they are not putting in people’s bodies anymore,” she explained via her Instagram Stories, according to the outlet. “At the time when I got mine, they were the latest, the greatest, the most natural ever. Now they are not. So that’s why I was just like I want to get them out.”

Hayley wasn’t sure if her breast implants would impact her health. However, she didn’t want to take the risk. The doctors had to perform a fat transfer where they took it from another part of her body and inserted it into her breasts. Hayley said the procedure didn’t hurt and her breasts look “super natural.” She also thanked her surgeon, Dr. Sheila Nazarian, for performing the procedure.