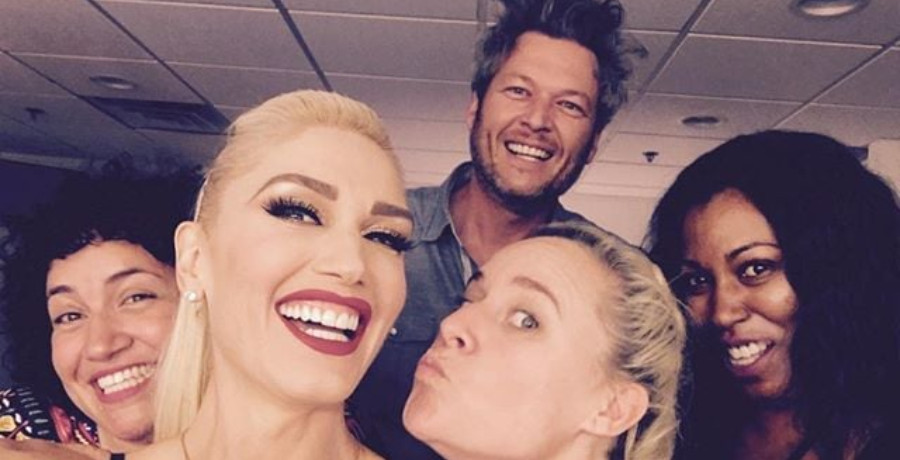 Blake Shelton made something special happen at Ole Red Tishomingo. He surprised fans with his wife, Gwen Stefani. It’s their first appearance and performance as husband and wife. On Saturday, July 3, the two exchanged vows at his ranch in Tishomingo, Oklahoma.

Despite People’s latest report, the duo is no longer in Los Angeles. Rather, they returned to Blake’s old stopping grounds. On Thursday, July 15, Gwen and Blake stopped by his Ole Red restaurant in Tishomingo. Fans got more than they bargained for. Not only did they get to see the newly married couple, but they also got a free concert.

Blake Shelton took to Instagram to share two photos from the event. One showed him alone on stage with just his microphone and guitar. In the second photo, Gwen Stefani sang alongside him. She wore her classic look – a white tank top with jeans. She paired her super-casual look with layers of gold necklaces and gold bangle bracelets. As for Blake, he wore a black button-down shirt with jeans and a baseball cap worn backward.

“That was a blast yesterday!!!” Blake captioned the post. “Let’s do it again at @OleRed’s The Doghouse in Tishomingo!!! Rehearsal starts around 4:30! It’s not a show but it’s fun! And free…”

I’ve got some shows coming up soon so I’m gonna be rehearsing today around 4 CT at @OleRed’s The Doghouse in Tishomingo. Come on out and get yourself a drink if you’re bored. I repeat it’s only a rehearsal… It may not be good but at least it’s free!

From the looks of Blake’s Instagram post, it sounds like they will be there for most of the weekend. The “Minimum Wage” singer invited them back to join them. However, it’s not a free concert. It’s more of a free rehearsal that fans can enjoy. Blake and Gwen have many duets that they can perform live together.

Fans flocked to Blake’s post to comment on the surprise show. One noted that this made their day. Another loved seeing the duo wear their wedding rings. Some couldn’t help but comment on Gwen’s signature look.

Gwen Stefani and Blake Shelton performed their 2020 hit “Happy Anywhere,” which is also featured on Blake’s new album, Body Language. They also performed a rendition of “Nobody But You,” which the country singer released in December 2019 on his previous album, Fully Loaded: God’s Country. This comes off the heels of their July wedding. The couple reportedly returned to their home in Los Angeles, where they’re currently working.

“They’re both very, very busy this year with work, and this was the only time they could fit in the wedding,” an insider revealed in the latest issue of People.

That was a blast yesterday!!! Let’s do it again today at @OleRed’s The Doghouse in Tishomingo!!! Rehearsal starts around 4:30! It’s not a show but it’s fun! And free… pic.twitter.com/o6EVZp40PU

Gwen is currently working on her forthcoming solo studio album. She’s also busy preparing for her return to her Las Vegas residency. As for Blake, he’s currently filming Season 21 of The Voice. He will also return to the road as part of his Friends and Heroes tour in August.