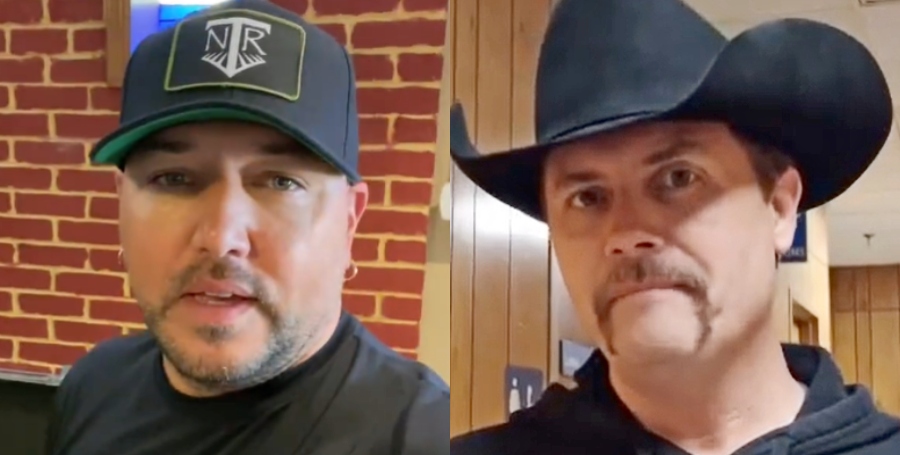 John Rich of the country music duo Big & Rich, is known to stand up for what he believes in. It appears that this is also the case when it comes to sticking up for fellow country artist Jason Aldean. Keep reading to find out why John Rich is standing up for Jason Aldean.

As Country Music Alley recently reports, Jason Aldean finds himself wading into controversial waters. It all begins with his wife, Brittany Aldean sharing photos of their children in anti-Joe Biden t-shirts. The first photo to stir up some controversy is of Memphis in a shirt that says “Hidin’ from Biden.”  In response, Jason writes, “My boy!”

In another series of photos, the whole family is wearing anti-Biden shirts. Navy wears the same shirt as big brother Memphis, while mom wears a shirt that says “Anti Biden Social Club.”

Initially, Brittany’s posts were well-received by fans. It seems that a lot of her and her husband’s fanbase has the same political beliefs. When people start to criticize Brittany, Jason steps in. Jason Aldean takes to his Instagram to share a statement. The country singer writes, “I will never apologize for my beliefs or my love for my family and country. This is the greatest country in the world and I want to keep it that way.” He concludes the post with a hashtag that says “unapologetic.”

What John Rich has to say about

Then, John Rich tweets directly to Jason Aldean. Rich writes, “Welcome aboard, brother @Jason_Aldean.” Which prompted Sean Spicer to tweet, “Add @Jason_Aldean @Brittany Aldean to the list next to @johnrich.” And Rich gives a lengthy tweet back.

Yep. No more stupid games. Freedom of speech/thought and declaration of Patriotism is more important than the approval of the libral music industry.”

Yep. No more stupid games. Freedom of speech/thought and declaration of Patriotism is more important than the approval of the liberal music industry.

Then tweets come in speculating that Jason Aldean’s career was over. However, John Rich thinks just the opposite will happen. Rich tweets, “His sales will surge. Hide and watch.”

Notably, this isn’t the first time John Rich sticks up for a fellow country star. He did the same for Carrie Underwood when she came under fire for liking a conservative tweet.

What do you think about John Rich defending Jason Aldean? Share your thoughts with us in the comment section below. Make sure to come back to Country Music Alley for more news about your favorite country stars.