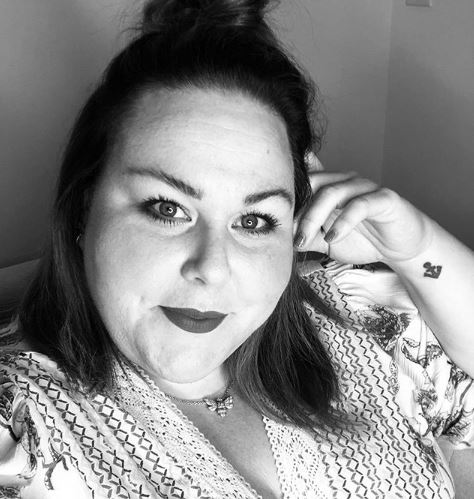 Chrissy Metz has been on Today several times as a guest, but the actress and powerhouse singer had no way of knowing just how special this Monday on the morning show was.  The This Is Us star was all dressed up to talk with “Hoda & Jenna” for their fourth hour on July 27.  There was plenty of good news to discuss during their conversation, and it was what happened before Chrissy Metz closed the show with “Talking to God” that made this Monday one to remember.

Chrissy Metz talked with the Today co-hosts from Nashville, where she makes her home.  The “Breakthrough” star might not have seen Jenna Bush Hager breakout of her virtual “box” this morning and celebrate being live and in-person with her favorite morning friend, Hoda Kotb.  Of course, Jenna and Hoda have to be properly socially-distant, so the Today crew located a table of just the right measurements to keep the co-hosts safe.

The broadcast pros were as giddy as middle school girls and music was already the talk of their table.  Both Jenna and Hoda already infatuated with Taylor Swift’s new album, “Folklore,” dropped just this weekend.  Hoda’s favorite track is “Invisible String,” and Jenna loves the sentimental “Cardigan,” which, by the way, Hoda was wearing for real.  Chrissy Metz was all set to warm hearts with her own soulful song.

Another reason why Hoda and Jenna had such big smiles was that Kathie Lee Gifford popped in on Today to share some precious recollections of her “Reeg,” Regis Philbin, following her warm, uplifting tribute of love on social media. Regis was always at home on Today, and his tribute was another special element of the Re-Reunion.

Chrissy Metz has merited some of the prestigious awards and honors in the acting craft, including a Screen Actors Guild Award and numerous nominations.  There is a reason why the gifted singer lives in a place called Music City.

On Saturday, July 25, Chrissy Metz was standing on that hollow wooden circle where great women of country music, including Dolly Parton, Loretta Lynn, Patsy Cline, and lately, Kacey Musgraves have made their impressions.   Just like other performances undertaken during the coronavirus pandemic, this momentous occasion for the singer had to happen without an audience, but it didn’t stop the passion in Chrissy Metz.

Chrissy couldn’t name a specific favorite female mentor, but she did say that the whole experience “happens in a flash,” and she still asking “Was that me?” on the most revered country music stage.  Not having an audience didn’t seem to matter so much for Chrissy Metz.  She compared it to shooting her series on set, where there is no “fanfare” for a great scene.  “You just have to be confident in what you did,” insists the actress, “and if you’re not, keep it moving.”

Metz knows what it is to bet everything on herself.  When she auditioned for the part of Kate Pierson, she had $.81 in her bank.  She recalled the perfect push from her mother, who proposed that “you can be miserable in LA, pursuing what you want, or you can be miserable in Gainesville.”  That choice was pivotal to Chrissy Metz.

‘Talking to God’ is a relatable song to everyone, including Chrissy Metz

Chrissy Metz chose the song “Talking to God” three months ago as part of her album to be released later this year.  The global pandemic and all its repercussions are only part of the reason why the song has struck such a chord in the hearts of listeners.

“I’m still learning the difference between moving on and forgiveness,” echoes the singer.  The same can be said of almost anyone on the planet now, for a variety of situations. Still, the resolve to move forward is always a start.

Chrissy Metz capped a Today morning with heavenly moments for Hoda and Jenna, Kathie Lee Gifford shared divine memories of Regis, also smiling from heaven.  Who could ask for better?

Carrie Underwood Hearkens Back To Signature Style On New Tune
Kelly Clarkson Listens To Fans & Delivers — Here’s How
Blake Shelton Headlines 2 Major Events, See What
Keith Urban Relies On Marital Devotion For Sobriety?
Jimmie Allen Puts The APB Out On ‘On My Way’ With Jennifer Lopez