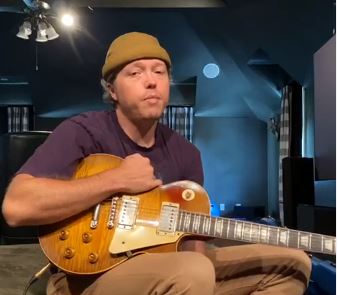 Jason Isbell just keeps on making music, pandemic or not, and his many admirers and fans just keep on listening.  The singer-songwriter insisted that music was more important to people than ever after completing his “Reunions” album with his band, The 400 Unit, millions of song lovers validated his certainty.

By the end of May, “Reunions” reigned at the top of the Country, Rock, and Americana/Folk charts all at once.  It didn’t take a massive tour to drive sales– it only took the pure, unadulterated truth that is a trademark of any Jason Isbell effort.  Of course, the artist looks forward to the day when he can see faces looking back at him from front rows, and voices joining in on the choruses.  No one, including Jason Isbell himself, is sure what shows will look like in the post-COVID-19 world, but just a peek on YouTube will let anyone know that the man who started writing songs as a teenager in the Muscle Shoals studio training ground is still turning out some of the best music anywhere.

Next to keeping well and safe with his wife, acclaimed fiddle player, Amanda Shires, and their four-year-old daughter, Mercy, Jason Isbell takes particular pride in his guitar collection, which contains more than one “holy grail” in the estimates of guitar giants.  He keeps the humidity of his barn just right for the health of his instruments, as he explained to GQ in an August 4 feature.  Music and life are inseparable for Isbell, and some things are priceless.

Some 60 guitars and stories to tell from Jason Isbell

Quantity doesn’t always override quality, as the 60 or so stringed instruments indicate for Jason Isbell.  Vince Gill has rooms and specially designed cabinets to hold his collection.  No one doubts Gill’s mastery, but Isbell takes it for tenderness in telling the stories.

He starts with an Electra Les Paul Copy that his Uncle Phil gave him because Phil wanted a “pointy guitar” so he could play like Eddie Van Halen.  The original still evokes fond memories for Jason, but nothing like the guitar he got at 15.

Jason Isbell pleaded with his mom to give him an American Strat Plus for Christmas when he was 15, and of course, she could do nothing but provide it under the tree.  The musician confessed that when he first found real success with the Drive-By Truckers, compulsion pulled him to “buy as many as I could afford” and that insatiable habit, like others he found, became problematic.  In the past year, he has only bought one guitar, attesting that he likes what he already has.

The Les Paul Sunburst has a holy tone to Jason Isbell

Jason Isbell is far from the first guitarist to be smitten with a Les Paul guitar, and his first love in that line was his 1953 Les Paul.  Jason lovingly described how the sweat off of past players caused the gold-top finish to oxidize into a luminous green color.  “This guitar sounds like rock ‘n roll,” stresses Isbell, “so if you wanna play fast rock ‘n roll– this is FAST!”  He also notes that the instrument is heavy, adding “but that’s okay– I am, too.”

With genuine reverence, Jason Isbell lifts his 1959 Les Paul Sunburst to his lap.  As he cradles the guitar, he tells how Ed King of Lynyrd Skynyrd owned the instrument for many years.  The guitar was even stolen from King and kept by a billionaire collector for several years before King saw his rightful position in a Japanese book about guitars.  The collector fairly allowed King to have the guitar back.

Some playing is priceless

Isbell related that the instrument is “worth a lot,” generally appraised between $500,000-to $1 million. “Mine isn’t worth quite that,” the artist defends.  He does admit that he reminds himself of the fact “that that guitar is in the room with you. That guitar is right over there.”

The memory of playing the instrument that has only 250 of its line remaining is permanently vivid to Jason Isbell.  “I heard Joe Walsh say that that was the best guitar ever made– in the world.”  For better or worse, Isbell also played the instrument and was so overcome that he couldn’t even drive home. He called his manager, asking her to arrange however many private shows of any kind that he could play in order that “my family or my band don’t have to suffer.”  She got the numerical calculations to work out.  Every time Jason Isbell was playing in some backyard, by the volleyball net, he would post himself playing that 1959 Les Paul Sunburst, and savor that it was worth it.

A good guitar is many things to Jason Isbell

Jason Isbell describes that a good guitar doesn’t need much to be worthy. “It means to be comfortable, the strength is the right distance from the fingerboard, and the knobs have to work,” the artist boils it down.

He still loves the story of his 1965 candy apple red Telecaster.  It has four coats of paint to achieve the perfect hue.  The Grammy winner admits that the Stratocaster is more comfortable, but nothing allows a guitarist to go “fuzzy and crazy” like the Telecaster.

Jason Isbell remembers the day he gave money on the spot to his producer, Dave Cobb, for his 1961 Gibson ES 335 after the making of “Southeastern.”  “You can go anywhere with it—from jazz to rock to country,” relates Isbell, but it certainly takes talented hands.

A gift from his wife for Father’s Day is also very special to Jason Isbell.  The entire music world mourned the passing of country and Americana music legend John Prine from the coronavirus in early April.  The loss of his dear friend left Isbell “completely gutted.”  He performed “Hello in There” for “Picture Show: A Tribute Celebrating John Prine” and later in June, Amanda gave her husband the Gretsch White Falcon that John Prine loved to plug-in and play loud in the morning. It was his substitute for a cup of coffee.

Jason Isbell doesn’t forget his great love for acoustic guitars, either. The 41-year-old insists that the Martin D-18 series from the 40s was the pinnacle.   The models were known as “banjo killers” in bluegrass bands.  Now, there is a signature model of Martin guitars for Jason Isbell, and he’ll be happy to play more than a few songs for the folks once the road is safe again.