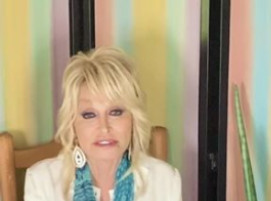 Dolly Parton has the gift for finding the perfect words to speak straight to the heart.   The most successful female artist in country music has been going like a Tennessee freight train across seven decades since writing her first song, “Little Tiny Tasseltop,” at age 5.  That song was about a favorite cornhusk doll, lovingly made by her mother.  Avie Lee Parton rushed to get her daughter’s words on paper as Dolly sang into a tin can microphone.

Dolly Parton never stopped writing songs.  Her catalog spans some of the most memorable songs in all of country music, pop, and of course, infectious movie theme songs to match her roles.  The “Coat of Many Colors” songstress always wears her heart on her sleeve.  She’s also a very candid straight-shooter when it comes to talking about what matters to her.  The country music legend used complete honesty and uncompromising words when asked about her support of Black Lives Matter in a Billboard interview, reported by The Daily Beast on August 14. As always, Dolly tells it like it is, even when it comes to her own changing attitudes.

The world is more beautiful in all colors, says Dolly Parton

“Of course Black lives matter,” Dolly Parton boldly asserts.  “Do we think our little white a**es are the only ones that matter? No!”

The global entertainment icon and philanthropist also fully grasps that the burgeoning Black Lives Matter movement centers on “people having to make themselves known and felt and seen.”

No single cultural shift can erase 400 years of oppression or suppression, but today’s headlines have prompted a unified bond between all humankind that change must happen.  Sadly, cameras are still capturing scenes that should never be happening. But and honest dialogue is happening, too.  Dolly Parton has always been proactive for positive change.  She feels an awakening is on the way.

“I honestly feel like I’m just getting started” 💗 So honored to be on the cover of @billboard for the very first time. Read the full story now! https://t.co/yEa77Jelcb

Judgment is something that Dolly Parton just doesn’t buy

“I do believe we all have a right to be exactly who we are,” declares Parton.  She decries that “all these good Christian people, the last thing we’re supposed to do is judge one another.” She firmly insists that judgment is a God-job, not a human one.

The superstar’s perspective was put into focus recently, when Dolly Parton was honored by the GLAAD Awards for her “Two Doors Down” episode of her “Heartstrings” series, inspired by her songs.  The episode involves a couple “coming out” and coming together with family at a sister’s wedding.  Dolly Parton happens to show up as the musical entertainment with a mini-concert.  There’s nothing like a heartfelt Dolly Parton song to ease hearts into putting prejudices away.

Everyone knows about the recent transformations of Lady Antebellum to Lady A (legal squabbles notwithstanding).  The Chicks are as comfortable as ever in their strong female strength since leaving “Dixie” in the dust.

Speaking of dust, Dolly Parton got the jump on many artists now in transition to new identities.  When it was brought to her attention that the former Dixie Stampede had a hurtful connotation from the past, she instantly decided to go with just The Stampede and the audiences are still yearning to see her horses and riders prance and dance with their tricks.

“When you realize something is a problem, you fix it,” Dolly Parton relates of her life formula. “Don’t be a dumba**.  That’s where my heart is.  I would never dream of hurting anyone on purpose.”

Blake Shelton Headlines 2 Major Events, See What
Keith Urban Relies On Marital Devotion For Sobriety?
Kelly Clarkson Listens To Fans & Delivers — Here’s How
Jimmie Allen Puts The APB Out On ‘On My Way’ With Jennifer Lopez
Carrie Underwood Hearkens Back To Signature Style On New Tune