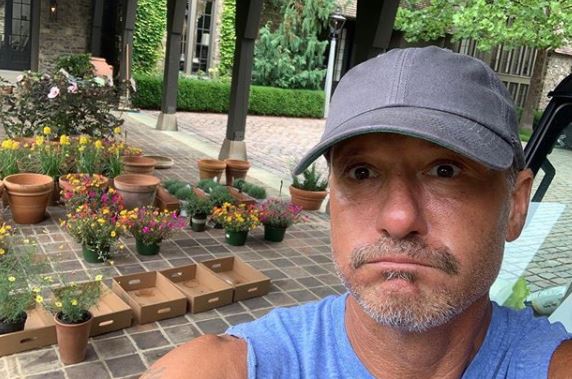 Country music superstar Tim McGraw has been tantalizing listeners with songs from his album “Here On Earth.”  This is the first collection of all-new music from the singer in five years, and fans are craving the songs.  Unlike so many of today’s albums, McGraw stays true to his tradition of taking a listener on a journey of life through an album.  “Here On Earth” runs over an hour of music through its 16 tracks and every single one is perfectly placed to ease pandemic-weary souls.

Tim McGraw has been singing songs from morning to night lately. He serenaded coffee drinkers on “Today” recently and did a late-night set for Stephen Colbert last week. On August 28, Tim wasn’t the star of the hour with Kelly Clarkson.  The man with 16 mega-selling albums now under his belt believes he rates last among the singers in his family, and he even brought along proof from the dog.

It might have been Tim McGraw or his stunningly ageless wife, Faith Hill, who captured the precious video-snippet of the family dog, Stromboli, being lovingly directed by the couple’s daughter, Maggie. Neither mom nor dad utters a word or note.

Kelly Clarkson couldn’t help but to be blown away by the soaring voice of the 21-year-old middle girl of the McGraw family.  As if giving a private lesson to the much-loved pet, she primes him for his moment by gradually reaching her own soaring vocal heights.  Stromboli takes over, hoisting his nose high in the air and treating everyone to an impromptu canine opera.  An unidentified guest in socks only looks on and smiles.

Of course, singing is a family legacy with Tim McGraw and Faith Hill filling her home with song.  Fans may remember that Maggie and her sisters sang on Tim’s song “Last Dollar” in 2007.  Their mom joined in on the spirited female chorus to close the song written by Big Kenny.  Big sister, Gracie, also fronts her own alt-rock band, Tingo.

Is singing included in the breed description for Tim McGraw’s family dog?

“To be fair, Stromboli sings a lot better than me,” declares Tim McGraw to Kelly, as noted by Yahoo.  “I’m probably the worst singer in the house.”

All through their growing years, Tim McGraw and Faith Hill kept close and protective ties with their three daughters while encouraging their individual talents.  The demands of dual high-powered careers never kept the parents from maintaining domesticity.

Tim McGraw explains that even the dogs came as a family.  Stromboli and one sibling in the road of Italian Bracco’s remain– Stromboli at home and the other “down at the farm.”

The breed is described as “smart, efficient, and pleasant.”  The dogs are also known to be gentle with children.  Stromboli is obviously much loved in the McGraw family, no matter if he’s singing or not.

Many more songs to love from Tim McGraw

Tim McGraw related how the songs on “Here On Earth” were actually recorded before the virus crisis, but the loss of countless lives and the toll on some many more only lends deeper meaning to “when we find out why we’re here on earth,” as the title song echoes.

Some of the lush orchestrations, like those in the opening of “L.A.,” hearken back to the sound of the 70s. The essence of Jimmy Webb and Glen Campbell comes through, and Tim McGraw’s comfort in who he is as an artist makes every song a mutual experience.

The sound of an old-time church piano takes over on “Hallelujahville.” The song lauds the small town, faults and all. Tim McGraw credits Faith Hill for much in his life, including getting him to his vocal best while on their last Soul2Soul tour.  He delivers flawlessly on this one, and his partner in life and music is justifiably proud.

For her part, Faith Hill calls the new album “a masterpiece.” While she didn’t name a favorite among the newest Tim McGraw songs, she certainly hinted at one with a hashtag.   After her glowing review from a private family listening party, Faith closed her words with “#Da*mSureDo” denoting the centerpiece love song.  After more than a quarter-century of love, she’s allowed to play favorites.