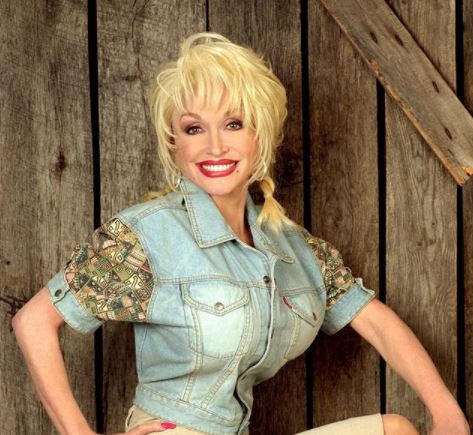 Dolly Parton has probably seen countless images of herself engraved on all variety of body parts among her fans.  Imitation is the finest form of flattery, so the country music legend assuredly takes the displays of body art as a compliment.  When it comes to her own body, however, Dolly disclosed in a Today feature that the tattoos which adorn her body are in good taste and relate to something not every fan knows.

When it comes to the husband who has held her heart through 54 years of marriage, Dolly Parton doesn’t need to rely on a picture to remind her of the bond with her husband, Carl Dean   She says the secret of their longevity from her perspective comes down to passion, as Yahoo relates via People.

“I do have some tattoos, that’s true,” Dolly Parton divulges, confirming what many admirers already knew.  “But they’re tasteful.  I’m not a tattoo girl.”

Parton cherishes the Smoky Mountain roots of her upbringing and embeds the imagery of the nature that was all around her and 11 siblings in Sevier County, Tennessee through many of her songs.  Nature reflects in the symbolism of her tattoos.

“I like to make positives out of negatives,” she declares as part of the Dolly Parton life philosophy.  Her ink artwork started with a beehive to cover a small scar.  The 74-year-old “Love Is Like a Butterfly” singer-songwriter adopted the beautiful insect as her signature symbol, along with the song, decades ago.  She describes that “ribbons and bows and butterflies” appear on various areas, for deeply personal reasons.

Dolly recounted a time of being gravely ill and having to use a feeding tube.  Because of her fair skin, the scar left by the indention into her side turned purple.  Rather than feel self-conscious, Dolly Parton opted for the beehive symbol, and other beloved emblems of the natural world followed.

Dolly never tries to be anything but who she is, and she doesn’t seem to mind the speculation about more tattoos in her future.

“Who knows? I may get some more later,” Dolly Parton concede you regarding more delicate ink designs.  The country girl at heart doesn’t even deny that she might just go “whole hog” for tattoos, either.  “I may just have to get covered with tattoos,” declares the timeless country music queen, “just so everybody can be right!”

One thing Dolly Parton can promise her fans is more music and film projects to come.   Her latest Christmas album, “A Holly Dolly Christmas,” comes out on October 2.  Dolly was in such a rush to get her latest edition of holiday cheer done that she had her goddaughter, Miley Cyrus, singing Christmas carols from her kitchen in July.

The ageless artist celebrated great success with her “Heartstrings” series on Netflix.  Dolly won’t wait long before the subscription service asks for more..  Each episode is based on a Dolly Parton song, and the superstar has made meaningful cameos in the storylines.

Dolly Parton recently chatted with young country star and newlywed, Gabby Barrett, sharing wisdom on her successful marriage.  When Parton gets the question asking if she has a tattoo of her husband, Dolly assures that “he’s tattooed on my heart.” When it comes to her most attractive quality to her lifelong love, she says that confidence is the key.

Dolly asserts “that’s sexy,” referring to being a confident woman.  Not every woman has the same relationship with rhinestones, sparkle, and big, blonde hair that is a trademark of Dolly Parton. Dolly gives passionately, loves passionately, and sings and writes straight from the heart.

“I’m a very passionate person in everything I do and I think passion has great sex appeal.”  It’s no wonder that the sparks that ignited the connection and devotion between Dolly and Carl Dean when she was 18 are still blazing.  “It’s magic, it’s an energy,” insists Dolly Parton, who adds “I’ve always been a great lover because I’m passionate.”

Dolly describes how she and Carl still share “special little times.”  The man she met as a Nashville businessman has a romantic bent for his bride.  In the springtime, it will offer her bouquets of flowers in bloom, and “write me a little poem, which is priceless,”  to the woman known for her project words in a song.  The two sometimes pull up to a Days Inn for a weekend of fun, or just enjoy home-cooking or a picnic.

It doesn’t take finery for Dolly Parton to express her passion, and only she knows what special meaning or memory her next tattoo will capture.