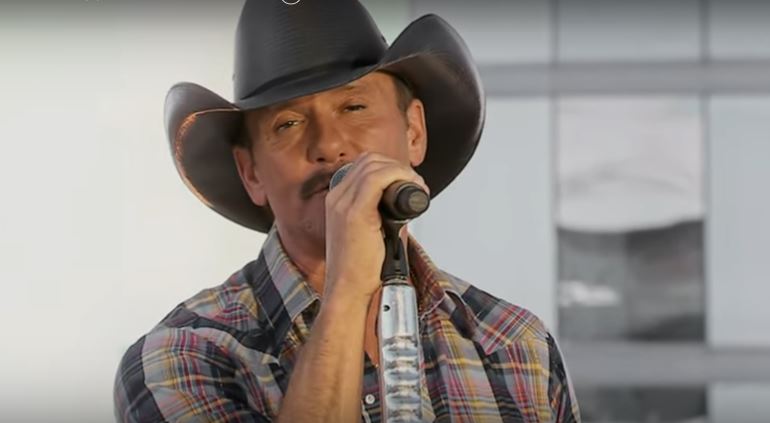 Tim McGraw and Faith Hill have been singing love songs to each other almost from the moment they met.  Since the two superstars came together in 1996 on the Spontaneous Combustion Tour, they sparked a love that has become legendary in country music.  In many ways, they have sung their life story in songs like “It’s Your Love,” “I Need You,” “Let’s Make Love” and dozens more through their years together.

No couple in country music brings genuine, inescapable passion to a song like Tim McGraw and Faith Hill, but most of the words to their unforgettable ballads were from other songwriters, such as Ed Sheeran, whose song, “The Rest of Our Life,” written with a few of his collaborators, became the centerpiece of the 2018 incarnation of the Soul2Soul Tour.

When it comes to celebrating 24 years of love, laughter, joys, trials, and tears as husband and wife, however, Tim McGraw truly speaks from his heart, as People via MSN and CMT Edge confirm.  The husband’s tender tribute rang true to the core and didn’t require rhyming words.  This is a rare, true-life love story to celebrate “Here On Earth,”  as the title song from Tim’s latest album speaks, and for eternity.

Say what you will, but Tim McGraw has certainly learned some lessons on speaking emotions from all the exposure to Lori McKenna’s gifted way with a song that both he and Faith Hill have experienced firsthand.  Along with a lovely, homespun montage of photographs, Tim focused his words on all that mattered.

“24 years…” McGraw reflects, noting how the years have “rushed by in a series of beautiful, painful, and unexpected moments.” He doesn’t neglect that he and Faith have experienced “exciting, inspiring, and heartbreaking events” through their union as one. No couple, regardless of outward success, has butterflies and rainbows without the shattering pain that fills dark nights and struggles that no one ever knows.  Tim McGraw and Faith Hill have been more than candid about rough patches through their quarter of a century together.  Still, they find strength in each other and in faith to face one day at a time together.

From the time the couple exchanged vows, they pledged to never be apart for more than three days straight.  Closeness builds a unique camaraderie, especially through these self-quarantined times.  Tim McGraw extols Faith Hill as a mother and credits fatherhood for the man he’s become.

24 yrs……. @faithhill
These years have rushed by in a series of beautiful, painful and unexpected moments….
We have loved, laughed and cried through exciting, inspiring and heartbreaking events in our lives together pic.twitter.com/DextAEc2X0

In the next continuing portion of his post, Tim McGraw gets to the heart of the McGraw family—their daughters, Gracie, Maggie, and Audrey.  Their beautiful female brood is grown now and mom and dad are 53, but the gift of family and sending the girls into the world with roots and wings was a priority to Faith Hill.

“U have been a role model for three remarkable young women who have made me a better man than I ever thought I could be…” the proud husband and father writes.

Tim McGraw is famous for singing songs like “If I Was a Cowboy” from his latest collection, but the father spent precious time with his teenage daughters watching “Downton Abbey.”  Faith Hill instilled some meaningful lessons about “quality time” into the whole family, for certain.

In May interviews, Tim teased that their youngest daughter, Audrey, was “over it” when it came to her parents’ cozy quarantine date nights.  Those simple suppers and TV on the couch usually don’t mean much in the moment to the kids, but they are the memories that last the longest.  McGraw reflected that he was so glad that his girls had Faith as “a guidepost” in their lives.  Mom showed her kinship with the eldest daughter, Gracie, by sharing pink hair.  Middle daughter, Maggie, starred in a sweet home video, singing with the family dog.

24 yrs……. These years have rushed by in a series of beautiful, painful and unexpected moments…. We have loved, laughed and cried through exciting, inspiring and heartbreaking events in our lives together U have been a role model for 3 remarkable young women who have made me a better man than I ever thought I could be….. The future will surely hold more of all of these things It only matters if I'm with you It only works if I'm with you My oxygen only exists if you’re by my side Forever and always living and loving our way through anything @faithhill

‘It only matters if I’m with you,’ proclaims Tim McGraw

Hopefully, someone grabbed a recorder, because Tim McGraw’s reflection on his future years with Faith Hill sounds like a timeless country music song.  “It only matters if I’m with you,” the singer refers to their future experiences.

“My oxygen only exists if you’re by my side,” the poet-singer echoes.

“Forever and always living and loving our way through anything,” Tim McGraw closes his anniversary words to his wife.  Faith gave her response a little later, with fewer words, but all sincerity.

“To my guy… The one that stole my heart 24 years ago today.  Happy Anniversary my love,” Hill reciprocated, adding three hearts.

These two should grab a guitar, and the Grammy folks should be on notice because this love song is already golden.