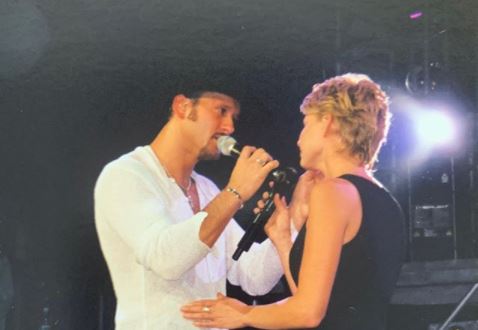 Country music superstar Tim McGraw is a model for how to make these concerning and self-quarantined times count.  The singer typically dons his black hat when he performs center-stage.  He’s wearing it on the celestial cover of his latest album, “Here On Earth,” too.  One thing that is abundantly clear about Tim McGraw is that he wants to make a difference for good with his time on the planet.

The pandemic has certainly put a halt to the plans of many performers, but Tim McGraw continues to find new ways of connecting to his fans, his family, and to humanity.  Besides numerous performances, most recently, a moving rendition of “I Called Mama” for the CCMA Awards, McGraw has found new ways of service and inspiration.  One of the passions that he and his wife, Faith Hill, have always held dear is honoring the veterans’ community.

Yahoo reports per Southern Living that Tim McGraw is being honored as the Tom Hanks Caregiver Champion, and will receive the award from the Elizabeth Dole Foundation on October 20. This uncertain era is the perfect time to step up in big ways, and this superstar performer has been proving his heart is even bigger than his faithful fans imagined.

The award presentation will culminate in the Heroes And History Makers virtual event for the Elizabeth Dole Foundation.  Senators Elizabeth and Bob Dole host the event.   Tom Hanks, Darius Rucker, and “Today” co-anchor, Savannah Guthrie are among the celebrity notables slated for the evening, which begins at 8 PM ET.

Previous recipients of the prestigious award are its namesake, Tom Hanks, and former First Lady, Michelle Obama.  Tim McGraw is undoubtedly humbled to become part of such an elite company, one so completely devoted to service and bettering the lives of others.

Tim McGraw likely envisioned the same kind of massive summer touring to support his album as his fellow hitmakers in country music.  As the pandemic became painfully and globally pervasive, however, the devoted father and husband pivoted his focus to turning music to places where it could help the most.

In May, Tim and Faith entranced fans with their intimate rendition of Alabama’s “Feels So Right,” complete with an unmade bed.   The performance was in support of the “Feed the Frontline” effort in support of frontline workers, health providers, and many others impacted by the virus siege.  Maggie McGraw, the middle daughter of Tim McGraw and Faith Hill, is vice president of the initiative for the Nashville area.  It never hurts to have a famous mom and dad spread the word to a few friends, but Maggie made it clear that giving was an intrinsic part of her upbringing.

The daughter described how she and her sisters “grew up with a mentality” that it was an obligation to give back, for anyone blessed with more, in any sense.

Tim McGraw embraced the nation’s graduates with a father’s heart, as Southern Living covered in May.  “The entire world is thinking about you, standing behind you, wanting to support you after you enter the next phase of your journey,” he echoed.   The father infused every comment with the reflection that he had two graduating daughters, one from college, and one from high school.

Caregiving is personal to Tim McGraw, who serves as the Honorary Chair of the Tug McGraw Foundation, named in honor of his father.  Tug McGraw passed from brain cancer in 2004. The son saw firsthand how the ravages of disease devastated the final days of the Philadelphia Phillies and New York Mets’ MLB legend.  The Tug McGraw Foundation works to support those with brain conditions and their caregivers, many of whom are veterans. Steve Schwab, CEO of the Elizabeth Dole Foundation, commended McGraw in a statement, noting the artist’s quest “to find resources for invisible injuries” that impact a lifetime.

Love and honor stay close to home for Tim McGraw

No matter how many songs go to number one for Tim McGraw, the singer is very aware of the one who is always there as his strength and support.  Faith Hill was the soul and the centerpiece of heartfelt words from her husband in honor of their 24th anniversary, earlier this week.

It didn’t matter that the words weren’t in rhyme.  They rang purely, deeply, and totally from the heart as Tim McGraw praised his wife as the “role model for 3 remarkable young women.”  The social media post also proclaimed that “My oxygen only exists if you’re by my side.”

Something good is surely in the air, the water, the home, and the philosophy of the McGraw family.  Doing good is a family legacy. Tim McGraw is just the latest member to carry the torch for making a difference.